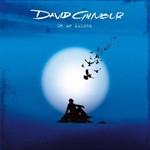 David Gilmour
On An Island

'On an Island' is the third David Gilmour album and his first studio recording since Pink Floyd's 1994 multi-platinum release, 'The Division Bell'. From the first moments of the sound collage that begins 'On an Island', you know it's a special experience that not only bears comparison with the best of Pink Floyd, but also confirms their lead guitarist & singer as an outstanding solo artist. Here he reveals a personal vision and a breadth of styles - folk, jazz, orchestral and rock - brought together as a unified piece by his lyrical guitar playing + instantly recognisable voice.

With orchestrations by the renowned Polish composer Zbigniew Preisner and a luminous production (assisted by Roxy Music's Phil Manzanera), there is virtuosity a plenty. Crosby & Nash sing harmonies; Robert Wyatt plays the cornet; Caroline Dale the cello; and Alasdair Molloy the glass harmonica. Pink Floyd's Richard Wright guests on Hammond organ, while Dave sweeps & soars with his often soul-piercing guitar + vocals. Yet the album never becomes grandiose. At its heart, it remains a reflective piece, not least because of the lyrics.

Although Dave takes some lyrical credits, most go to writer Polly Samson, continuing a collaborative partnership that began with 'The Division Bell'. The songs tell of shared experiences that evoke a breadth of moods, from the hauntingly beautiful title track (with a guitar performance set to enter the Gilmour canon of classics) to the meditative "The Blue" & "A Pocketful of Stones'", as well as the heavier rock & blues numbers "Take a Breath" + "This Heaven". In the spirit of intimacy, this album sees Dave's debut on the saxophone, as well as contributions by contemporaries from his pre-Floyd days.

'On an Island' is a collection of songs & instrumentals that had its genus in the critically acclaimed, 2002 London Festival Hall concerts. Gilmour has stepped out of his super-group to discover he's still at his peak - and he's rightly pleased. "It's my best & most personal work", he says. "Making it with my musician friends has been a positive experience on so many levels."

There are ten tracks on the album, which were produced by David Gilmour, Phil Manzanera and Chris Thomas.

"After being exposed to David Gilmour's 'On an Island' in its entirety, I can now confirm that it is the "work of art" that we all hoped it would be. Consisting of a series of ten beautifully understated songs that flow into each other exquisitely, 'On an Island' provides the perfect foil for the return of this pioneering "rock" musician.

'On an Island' is as close as what could have been to a new, fully fledged Pink Floyd studio recording, without actually having the band's name on the sleeve. However, it is a little mellower - if that is actually possible. The first few cuts, which include the instrumental opener "Castellorizon" + the title track, reflect this perfectly. The possible exception is 'Take a Breath', which is noticeably more upbeat & direct compared to the other pieces on offer here. It's slightly reminiscent of such songs as "Learning to Fly" & "Take it Back", from 'A Momentary Lapse of Reason' (1987) & 'The Division Bell' (1994), respectively. It's got a great bassline too, which pumps along and keeps things moving nicely. Elsewhere, such songs as "Then I Close My Eyes" & "Smile" loosely evoke memories of "Us and Them" ('The Dark Side of the Moon' - 1973), plus the acoustic classic "The Fat Old Sun" ('Atom Heart Mother' - 1970). Other such sublime references to Floyd epics include "Red Sky at Night" ('Wish You Were Here' - 1975), plus "Where We Start" (Obscured by Clouds' - 1972).

Dave's guitar work is incomparably crystalline throughout the length of 'On an Island' and the actual solos that flow forth from his fingers are easily some of the best of his career. The production elements of this multi-layered recording are equally lush and you can be assured that the CD sounds outstanding on an appropriate hi-fi setup.

Being totally worth the wait, 'On an Island' is a stunningly rousing album that "progressive" music enthusiasts will lap up with deep glee. Think Peter Gabriel; the Alan Parsons Project; some of Phil Manzanera's post Roxy Music stuff; the Floyd (of course) + Dave's other "solo" albums and you'll get the idea - it's an utterly essential release that I wholeheartedly recommend."
-MARTY (25/02/2006)

Whatever People Say I Am, That's What I'm Not

The Young Ones - Series 2
more suggestions…