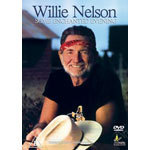 When Bob Dylan wrote "he who is not busy being born is busy dying," he could easily have been talking about Willie Nelson. Born in Abbott, Texas, on April 29, 1933, Willie Nelson is one of the most popular, prolific, and influential songwriters and singers in the history of American music. He has been inducted into a number of music halls of fame, was named a Kennedy Centre honouree in 1998, and was given a Grammy Lifetime Achievement Award in 2000. He has recorded more than one hundred albums over six decades. Join Willie Nelson in this live DVD where he pays tribute to other song writers and their classic songs.