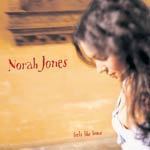 Encore, Norah! The winner of eight Grammy awards returns with a beautiful follow-up to 'Come Away With Me'.Guests include Dolly Parton, Levon Helm and Garth Hudson of The Band

Encore, Norah! The winner of eight Grammys remains in the Top 40 of the Billboard 200 chart with her multi-platinum selling debut album 'Come Away With Me', but Norah is moving on...

"I really can't think about the success of last year," she says, "I'm just focusing on trying to make the best music I can at this point."

On 'Feels Like Home' veteran Arif Mardin again takes up production duties, along with Jones, and guests on the album include Dolly Parton, Levon Helm and Garth Hudson of The Band, jazz drummer Brian Blade, Jesse Harris (Grammy-winning songwriter of "Don't Know Why"), Rob Burger and Tony Scherr.

The album features 13 new songs, including 7 written or co-written by Norah with each member of her touring band contributing original songs as well

"Norah's 'Come Away With Me' album was greeted with a mixture of reverence and enthusiastic endorsement the media usually reserves for artists who have attained living legend status - not 22 year old newcomers launching their debut out into the world. And for once, this proves to be more than industry hype and hyperbole. 'Come away with Me' is a truly stunning album. Like her Blue Note labelmate Cassandra Wilson, Norah Jones seems insistent on exploring work from beyond the established jazz canon.

Her background as a New York born, Texas raised music student is apparent in the shimmering hybrid sound she has perfected (equal parts Billie Holiday and Emmylou Harris' 'Wrecking Ball' ). Indeed, it is the fusion of various streams of sound which make her sound difficult to categorise (if it is solely jazz then so are large parts of Joni Mitchell's and Rickie Lee Jone's careers). But most of all you will fall in love with her voice - sultry, knowing and possessing a fragility and interpretative understanding beyond her years."
- AIDAN

With her honey-and-smoke voice, Norah transcends musical genres, drawing as much upon folk-based pop and country as she does jazz and classic soul

You Raise Me Up

What's Wrong With This Picture?

We Shall Overcome: The Seeger Sessions (Limited Edition)
more suggestions…