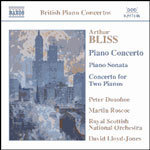 "Eager and polished performances that do Bliss absolutely proud. Peter Donohoe's ambitious British Piano Concerto project for Naxos brings us the work premièred by Solomon at the 1939 New York World Fair, the Piano Concerto (Sir Adrian Boult conducted the New York PO). It's a big, heart-on-sleeve work which mirrored Bliss's belief that the American people 'are the most romantic in the world'. The Piano Sonata, written for Noël Mewton-Wood (whose fine recording of the concerto has recently appeared on CD) shows Donohoe's skills off well."
Editor's Choice - Gramophone Magazine (February 2004)

Arthur Bliss was half-American on his father's side. He studied with Charles Wood at Cambridge, where he also came under the influence of Edward Dent, and then at the Royal College of Music. In 1912 he met Elgar who encouraged him. After distinguished service in World War I, in which he was wounded, gassed and mentioned in despatches, he returned to England and gained a reputation of some notoriety with works for ensembles (often exploiting the voice) such as Madam Noy (1918) and Rout (1920), which were deemed to be modern and experimental.

During the 1920s A Colour Symphony (1921-2), Introduction and Allegro (1926), the Oboe Quintet (1927), and Pastoral (1929) established Bliss as an important voice. His war experiences found musical expression in the profound choral symphony Morning Heroes (1930), while the Clarinet Quintet (1932) and Music for Strings (1935) showed his command of absolute forms. In 1934-5 he composed the music for Alexander Korda's film of H.G. Wells's Things to Come, the first of several remarkable artistic collaborations, which also included the choreographer Ninette de Valois with the ballet Checkmate (1937), Robert Helpmann, the choreographer of the ballet Miracle in the Gorbals (1944), J.B. Priestley, who wrote the libretto for the opera The Olympians (1948-9), and Christopher Hassall and Kathleen Raine in the choral works The Beatitudes (1961) and The Golden Cantata (1963) respectively. These works indicate the range of Bliss's art, which also included concertos for piano (1938-9), violin (1955) and cello (1970), vocal works and a substantial body of chamber music. Among his other major achievements are the orchestral Meditations on a theme by John Blow (1955) and Metamorphic Variations (1972). Bliss was knighted in 1950 and appointed Master of the Queen's Musick in 1953, a post he served diligently with distinction.

In 1938 Bliss was an adjudicator at the Ysaÿe International Competition for pianists; in his autobiography As I Remember he recalled that 'Hearing … so much brilliant playing made me wish to write a work for the instrument myself. I must have put intense concentration into the wish for almost immediately afterwards the opportunity arose'. It came from the British Council, which commissioned Bliss to compose his Piano Concerto to mark British Week at the 1939 New York World's Fair. The première took place on 10th June that year, with Solomon as the soloist, and the New York Philharmonic Orchestra under Adrian Boult.

As to the character of the concerto, Bliss described it in his own programme note: 'It was to be played by Solomon and dedicated to the people of the U.S. so obviously it had to be a concerto in the grand manner and what is loosely called "romantic". Surely the Americans are at heart the most romantic in the world'. 'Grand' and 'romantic' are certainly the key words for it is both. Here is a big-boned work, energetic, ebullient, and forthright, but within this expansive framework there is also room for quieter, more personal emotions portrayed in a rich vein of lyricism. The adjective 'romantic' is equally appropriate for a work following in the tradition of concertos by Liszt, Tchaikovksy and Busoni. Indeed the ferocious double octaves at the opening of the work indicate Bliss's intentions and a virtuoso of a high order is required to fulfil them.

The first movement grows from four principal ideas: first, a dynamic theme sweeping upwards announced by the full orchestra and incorporating a triplet rhythm; secondly, the bitter-sweet fall of a minor ninth on the violins revealing a characteristic fingerprint of Bliss's which recurs in all three movements; thirdly, a fanfare-like theme which injects a hint of unease into the otherwise urbane mood; fourthly, a theme of calm beauty in marked contrast to the first three. The first three of the themes dominate the development culminating in a climax where, against an exultant violin counter-melody and the piano's syncopated decoration, the opening theme is heard in the bass of the orchestra. After a cadenza the recapitulation allows the contrasting theme to come into its own. A phrase of utter simplicity opens the Adagietto, the peaceful meditative outer sections of which frame a more animated core. Once more the minor ninth interval is in evidence and the movement closes magically with the piano's final astringent, questioning chord, answered by the strings' affirmative answer. A delight in rhythm is apparent in the finale. First, a pizzicato theme for cellos and basses hints expectantly at future possibilities, but is forgotten as the moto-perpetuo-like rondo theme sweeps in. From here on, apart from one brief respite, the pace is relentless and high spirited with cross-rhythms abounding. The episodes are varied in character: one is purposeful and direct, while another has a jazzy, syncopated theme. Time and again, though, the rondo theme is in the background, ever ready to steal the limelight, as when the entire orchestra takes it up fortissimo. As the movement reaches its climax, the pizzicato theme from the start of the movement is revealed as a richly harmonized melody which surges to a majestic close.

Apart from Solomon, another early exponent of the Piano Concerto was the Australian pianist Noel Mewton-Wood. His performances of the concerto led Bliss, in 1952, to compose his Piano Sonata for him and he gave the première in a BBC broadcast the following year. It has a similar overall romantic and heroic mood to the concerto. The first movement has a relentless, driving force and grows from a rhythmic figure in triple time marked by a characteristic upbeat. Contrast arrives with a singing melody decorated by grace notes. Two climaxes are shaped from these ideas but the movement ends with a mysterious coda. A set of variations on the calm sequence of richly harmonized chords forms the basis of the Adagio, while the finale opens with a passionate dramatic statement, which is immediately recast in a lyrical vein. A second idea appears in dotted rhythm which gradually assumes the character of a swirling dance, to lead to the calm centre of the movement with the initial idea played in an almost improvisatory manner. The tempo takes off again and the sonata ends in bravura display.

The Concerto for Two Pianos has its origins in one of the experimental works exploiting the voice that Bliss wrote in the years immediately after the first World War, the Concerto for piano, tenor and strings of 1921, which is now lost. Realising that this unusual combination would be a hindrance to further performances, yet being fond of the work, Bliss decided to recast it as a concerto for two pianos accompanied by an orchestra of wind, brass and percussion. In this form it received its première in Boston in 1924. Bliss was still not satisfied, however, and reorchestrated it for full orchestra, and as such it was first heard at the Proms in 1929. A final revision in 1950 resulted in the work heard here, although there was to be yet one more metamorphosis, for Bliss sanctioned a version for three hands in 1968 for the pianists Phyllis Sellick and Cyril Smith.

Although the concerto is cast in one continuous movement, it is clearly divided into three distinct parts, in which the principal musical ideas are all derived from a short two-bar theme heard in octaves in the second bar of the work. In his programme note for the 1924 version, Bliss likened the development of this theme to 'an Oriental print' which 'is often developed from one small and seemingly inconspicuous pattern'. In the original piano and tenor concerto, Bliss had suggested that there was a third soloist, a xylophone, and the part remained prominent in the later versions, particularly in the last movement. If the bubbling brilliant splash of sound at the opening brings Stravinsky's Petrushka to mind, it reflects not only that composer's influence on Bliss's early works, but also the latter's lifelong preoccupation with rhythm and colour. A jig-like theme on first violins, then the first piano provides jaunty contrast, while a pensive passage for brass and wind leads to the slow section. Here the mood is meditative with emphasis on the decorative writing for the pianos, reflecting Bliss's description of the pianos in his 1924 programme note as 'two great arabesque-making machines'. In the finale the carefree, initial mood of the concerto returns. Towards the end the music refers to the slow movement and then, as the music comes helter-skelter full circle, to the opening of the concerto itself.
- Andrew Burn