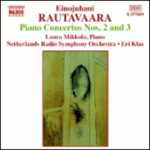 "Laura Mikkola sounds perfectly attuned to the character of both works and exhibits a wide-ranging, impressive technique..."

"Laura Mikkola sounds perfectly attuned to the character of both works and exhibits a wide-ranging, impressive technique... Eri Klas leads the Netherlands Radio Symphony Orchestra with a knowing baton throughout both concertos...Klas and the NRSO turn in fine work in this altogether worthwhile filler. The Naxos sound is excellent and the notes by Richard Whitehouse are informative."
Robert Cummings, Classical Net

Einojuhani Rautavaara was born in Helsinki on 9th October, 1928. Graduating from Helsinki University in 1952, he studied at the Sibelius Academy with Aarre Merikanto and, after winning a Koussevitzky Foundation fellowship in 1955, with Vincent Persichetti at the Juilliard School, and with Aaron Copland and Roger Sessions at Tanglewood. He furthered his studies in Ascona with Vladimir Vogel and in Cologne with Rudolf Petzold. A lecturer at the Sibelius Academy from 1966 to 1971, he was then appointed to the state position of Professor in Arts.

Rautavaara's early pieces, typified by the prize-winning A Requiem in Our Time (1953), drew on the Nordic classicism of Sibelius and Nielsen, as well as the influences of Bartók, Shostakovich and folk-music. His Fourth Symphony (1962) was among the first Finnish works to employ serial techniques, while the subsequent widening of his stylistic range gave rise, in 1972, to two of his most enduring works: Vigilia, drawing on Orthodox liturgical chant, and Cantus Arcticus (Naxos 8.554147), employing taped birdsong alongside modal and aleatoric (chance-derived) elements. Greater tonal orientation is evident in his more recent music, such as the last four symphonies (Symphony No. 7, Naxos 8.555814) and the operas Thomas (1985), Vincent (1990) and Aleksis Kivi (1997). Meanwhile the growing recognition accorded his music can be gauged from the number of recordings and international commissions received over the last decade.

Composed in 1995 for the orchestra of Espoo Music Institute, Isle of Bliss was inspired by Home of the Birds, a poem of Aleksis Kivi (1834-72) depicting the mythical concept of the island paradise. Rautavaara's piece broadly follows the overall form of the poem: a lively opening, passing into a reflective section, marked by contributions from numerous solo wind instruments, which evokes time standing still; at length, the emergence of an expressive string threnody denoting the arrival of dawn, then a recall of the opening pages which precedes the music's swift passing into silence.

Rautavaara's First Piano Concerto, written in 1969, was among the first works in which he turned away from an outwardly modernist aesthetic, seeking, in his own words, to evoke "the entire rich grandeur of the instrument". Twenty years later and the Second Piano Concerto, written at the request of Ralf Gothoni, finds an intriguing accommodation between traditional and more radical elements. Serial technique is employed, but the re-orderings of a twelve-note row do not determine the substance of the composition as mediate between the diatonic and chromatic facets of the melodic and harmonic writing. There are three movements, played without a break, with the duration of the outer two together equalling that of the inner one.

In Viaggio opens with rippling piano figuration against fragmentary orchestral writing, a passionate melody moving upwards through the strings before the soloist comes fully into its own. Percussive interjections heighten tension, as the strings drive the movement to a dramatic conclusion. The plaintive piano writing which begins Sognando e libero is echoed by strings and woodwind in tranquil repose. Towards mid-point the music unexpectedly gathers pace in a lively toccata, soloist and orchestra chasing each other up to a brutal climax, which ricochets into silence. The initial ideas are recalled, transformed in a way that suggests innocence lost and irrecoverable. Piano and percussion begin the finale, Uccelli sulle passioni, in uncertainty, strings and brass entering to swell the music dynamically and expressively. As in the first movement, strings soar upward, now against washes of 'bird sound' from the piano and the rest of the orchestra. The work does not so much end as recede out of earshot, as its very opening is fleetingly recalled.

Rautavaara composed his Third Piano Concerto, subtitled 'Gift of Dreams', for Vladimir Ashkenazy, who played and directed the première with the Helsinki Philharmonic in 1999. Again there are three movements, though the opening movement almost equals the length of its successor. Gently expressive string writing is complemented by that for the soloist, then the latter moves the discourse onto a higher emotional plateau. Brass and bells imperiously sound out the basic melodic motif, before the close in a mood of distanced calm. The second movement, marked Adagio assai, opens with ruminative piano writing, the orchestra providing an expressive backdrop. Piano, strings and timpani engage in a more rhetorical discourse, brass injecting an ominous note, then the piano continues in a tranquil dialogue with solo wind. The initial mood is at length regained, leading to an ending of rapt inwardness. The finale, Energico, opens brusquely, proceeding, by way of several alternately lively and reflective episodes, to a heightened apotheosis in which ideas from earlier in the work are recalled and transformed. The ending is again inconclusive, the soloist fading into the distance against gently ambiguous harmonies from brass and strings.