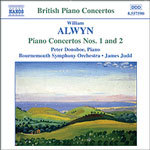 "Peter Donohoe, born-again champion of the British piano concerto, gives tremendous performances of two works he can rarely if ever have played live. This is music well worth discovering: and nestling between the two concerti is the splendid Derby Day Overture - again, fine work by the Bournemouth orchestra."
(Gramophone Sept 2005)

"Peter Donohoe, born-again champion of the British piano concerto, gives tremendous performances of two works he can rarely if ever have played live. This is music well worth discovering: and nestling between the two concerti is the splendid Derby Day Overture - again, fine work by the Bournemouth orchestra."
(Gramophone Sept 2005)

"Of all the enterprising series that Naxos has been undertaking, the 'British Piano Concerto' must be one of the most valuable. Of course, whenever works like these are resurrected or 'discovered' afresh, some emerge as more important and worthwhile than others. Almost all that I've come across have been worth getting to know, this new release being no exception.

Alwyn is probably best known for his film scores, which number over two hundred, but, as Andrew Palmer's interesting note tells us, he had an enduring love for the piano and composed for it throughout his life. Palmer speculates that the reason we don't hear much of the large-scale works for the instrument is due to their demands for a virtuoso technique. Needless to say, Peter Donohoe positively laps up the considerable challenges thrown at him by these works.

The First Concerto is a short, one-movement work in four contrasting sections. It was written for Alwyn's fellow student at the Royal Academy of Music and lifelong friend Clifford Curzon, who gave the premiere in 1931 with the composer conducting, fittingly, the Bournemouth Symphony Orchestra. Judd and Donohoe give a rip-roaring, no-holds-barred reading, ideal for a work with this sort of structure. Any thinness of melodic material is soon forgotten when the playing has as much panache as this, Donohoe particularly revelling in the Prokofiev-like toccata opening.

The Second Concerto is a much meatier work lasting nearer half an hour, though it had a troubled genesis. It was apparently commissioned for the 1960 Prom season but the pianist due to play it, Dutchman Cor de Groote, suffered a paralysis of the right arm and the premiere had to be cancelled. The work was virtually forgotten after this and, astonishingly for such an attractive crowd-pleaser, still awaits a public performance. Alwyn was always self-critical, having earlier in his career withdrawn a number of works, and he substantially revised the concerto, completely excising the slow movement and substituting a short linking orchestral passage. A full performance may have altered his opinion; his wife, composer Doreen Carwithen certainly felt the movement should be restored and it's her reconstruction (together with some revisions of the finale) that is heard here.

On the whole, I share her enthusiasm for the fuller piece. It has a romantic sweep and grandeur that, as Palmer points out, pay homage to Rachmaninov. This would have sounded terribly old-fashioned in 1960, especially for Glock's BBC, but with many listeners still placing melody at the top of their list for enjoyment in music, it could possibly find a place. The nods to Russian romanticism are a bit too overt at times (try 3'35 into the first movement - straight out of Rach 3) but it is immensely attractive and ebullient, with very colourful orchestration.

This is also true of the piece Alwyn wrote to substitute the concerto. Derby Day was written as a Prom opener and as such is energetic, bustling, rumbustious. I'm not sure I can hear Alwyn's adoption of the twelve-note row that Palmer mentions, more like a hint of dissonance and a slightly angular melodic line. The Sonata alla toccata is brimming with the neo-classical spikiness that infiltrated the styles of other British composers of the era, and Donohoe relishes the chance to show what he's made of.

Praise must be given to the excellent orchestral support under the often inspired baton of James Judd, whose Elgar 1 with the Hallé is still my favourite account of the symphony. It's good to have him recording regularly again for Naxos. Sound quality is very fine, and it is with keen anticipation that I await the team's next discovery."
(MusicWeb July 2005)