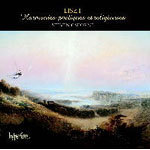 "Poetic, radiant playing that makes this one of the finest Liszt recordings ever made" Editor's Choice Gramophone Magazine (April 2004)

"Osborne provides utmost concentration, satisfying keyboard textures and sonorities, a larger-scale vision and a sense of direction. Top of the list of recommendations"
(ClassicWeb)

"Steven Osborne has been building an enviable reputation with some outstanding live performances and a select but impressive discography. His set of Messiaen's Vingt Regards sur l'enfant-Jésus was universally praised and in a way set the stage for this other extended, spiritual meditation. Liszt's collection is an extraordinary fusion of spiritual and earthly love, which also houses two masterpieces, Funérailles and Bénédiction de Dieu dans la solitude."
(Gramophone)

"This is a fine recital with a recording to match."
***** Five Stars (Recording of the Month) BBC Music Magazine 2004

One of Liszt's most personal and confessional piano cycles, the Harmonies poétiques et religieuses (composed between 1846 and 1851) contains two of his best-loved masterpieces - the serenely contemplative 'Bénédiction de Dieu dans la solitude' and the heroic elegy 'Funérailles'. This outstanding recording makes a much-needed case for the collection as a whole, setting these well-known works in their wider spiritual context. Important works such as 'Pensée des morts' (an extraordinarily dark meditation on the oft-visited subject of death) and 'Cantique d'amour' (one of Liszt's most beautifully expressive reveries) are revealed, as are rarely heard transcriptions of Liszt's own sacred choral works.

Steven Osborne captures the music's spiritual essence to perfection, further demonstrating his affinity with music of mystical contemplation, a quality so widely acclaimed in his superb recording of Messiaen's Vingt Regards.