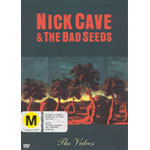 Fans of Cave have long been living off decaying VHS copies that they had either taped The Bad Seeds vids onto, or from the old original release. We now have them on DVD, including some extremely hard to find ones.

"The Videos" is a collection of twenty promotional films, including the rarely seen Stagger Lee and Wanted Man along with such classics as "The Mercy Seat", "The Ship Song" and "Where The Wild Roses Grow" (featuring Kylie Minogue).

With introductory links by the band themselves, it provides an informative, provoking, illuminating and passionately intimate journey through the very best of Nick Cave & The Bad Seeds.

The DVD includes two videos directed by Bad Seed Mick Harvey ("Deanna" and "Wanted Man") as well as Anton Corbijn's video for "Straight To You" and many directed by long time collaborator John Hillcoat.

The Videos is a vivid portrait of one of the most critically acclaimed songwriters of recent times.