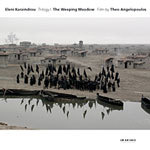 "I don't know whether it was the nostalgic sound of the Russian accordion, or the cry of the cello that touched me. I don't know whether it was the angelic fingerings of the harp or the whisper of the Constantinople lyra. In the end, I don' know which magical combination, which code Eleni Karaindrou's music is made up of, so as to open and reveal images of migration, uprooting or exile, hidden in the cell memory of each one of us. With nostalgia as a vehicle, this music travels inside us and brings us close to our deeper self. It contains the reflection and freedom of poetry."
Liana Malandrenioti, Difono

"Eleni Karaindrou's music doesn't accompany the images - it penetrates the images, it becomes an inextricable part of the images. I would say it takes part of what is called anima, so, in the end, you can't tell one from the other - that's how closely knit they are... I believe that Eleni is at the moment one of the best existing film musicians in the world".
- Theo Angelopoulos

The album The Weeping Meadow contains music written by Eleni Karaindrou - "Greece's most eloquent living composer", according to Time magazine - for Theo Angelopoulos's new film of the same name. The film is, on one level, an historical epic, tracing the lives of two characters from Odessa in 1919 through the civil war in Greece in 1949 and beyond. The first part of a projected trilogy, the movie, like much of Angelopoulos's work is multi-levelled, as well as being a potted history of the 20th century it is also a meditation on the meaning of "free will" amid social upheaval and political intrigue, on the interweaving of personal destiny and geopolitical realities. And there's a mythical dimension, too, with echoes of Oedipus, the Theban cycle myths, and Antigone.

If the characters in his films struggle to find and define freedom for themselves, Theo Angelopoulos's preferred soundtrack composer has always had more liberty - which may be one reason why the association with Eleni Karaindrou has continued for more than two decades. The Weeping Meadow marks the 7th occasion on which Eleni has provided music for one of his movies.

Eleni Karaindrou: "My journey with Angelopoulos has been going on for years because it is about something else. In me, he met the composer he was looking for, and what he had been looking for had no connection with the proverbial professional film music composer who arrives at the recording studio, chronometer in hand." By the time they came into contact, at the Thessaloniki Film Festival of 1982, each was well aware of the other's work and could see the potential for collaboration. "There was an intellectual affinity between us, a common aesthetic direction." 20 years later Karaindrou remains "fascinated by the fact that Angelopoulos is a poet, a man connected to his land, with a penetrating way of thinking about Greek history which makes his view timeless. And I am fascinated, too, by his ability to place his existential questions with such wisdom and intensity against a recognisable background, his own Greece, and to project them in such a way that they acquire global dimensions and speak to everyone."

As is well-known by now, and in stark contrast to the more traditional modus operandi of soundtrack composers, Eleni Karaindrou often finds her melodies very early in the film-making process, often before shooting begins. And this was also the case with The Weeping Meadow, when Angelopoulos and Karaindrou went out to visit locations in northern Greece, in 2001.

Eleni Karaindrou: "I found myself confronted by an incredible landscape. I was walking on the bottom of a huge lake during winter time when the water had withdrawn from the banks leaving some tiny puddles and streams here and there. It was misty. Far in the distance, you could barely discern the lake and all around there were mountains. In the middle of this endless, flat landscape there was a lonely tree and in front of me a village from the beginning of the century, that Theo made a point of 'resurrecting' to house his Odessa refugees. The cold was penetrating, the fog was thick, the first outlines of people started appearing on the horizon. The journey of images had begun...That night, I dreamt about those people who came and put their hopes in the new land, their fathers' land. A young boy, holding an accordion revived colours and rhythms…"

While writing the principal theme and the first two variations, Karaindrou returned to this landscape-in-the-mist: "I wanted to play the music loud on my cassette player, to hear it conversing with that outlandish place. It was a unique experience. I felt the music become the bridge connecting before and after, travelling in time along with the heroes of the story and the misfortunes of the land…I knew exactly what colours I was searching for. Deep, earthy, with the glitter of water and the sounds of drops falling. They would convey the grey, hollow threat of the horizon and the secret breathing of expectations behind dimly lit windowpanes…" In Karaindrou's score the sound of the bayan accordion "converses" with the French horn, in what she terms, with typical flair, "secret communication codes…articulating forgotten rhythms" which are slowly reanimated by the patient pulsations of the strings... "The journey had started and the harp was keeping track of the beats of the heart", the evocative sound of the Constantinople lyra assigned the homecoming theme… Even the ethnic backgrounds of the ensemble and orchestra members seemed connected to Angelopoulos's images of exile: "I looked at my musicians, one by one - Sergiu and Maria from Rumania, Renato from Albania, Patrick from Wales, Socratis and Konstantinos from Greece... so many faces from so many different places participating in a secret game in search of a common language…"

Eleni Karaindrou's background in ethnomusicology has also served her well in the association with Angelopoulos, and with "The Weeping Meadow", as with the earlier best-selling "Ulysses' Gaze," she researched a broad swathe of period music while preparing her score. "When I'm involved in that kind of work I'm closer to the central idea of the film and that helps me to write expressive music that meets the sentiment of the film." Seeking to serve the film she is not constrained by it. She writes her themes, developing them for diverse instrumental forces, and Angelopoulos works with excerpts and fragments of this material to underline the rhythm of his film or augment its images. But Eleni's music has insisted on its autonomy, and it has a life beyond the screen. The shaping of her albums has, since 1990, been the responsibility of her producer. "The creation of the final form of the work, I owe to Manfred Eicher. He gives shape and voice to my quests."

The recording of the music of The Weeping Meadow, made in Athens in April 2003, captures the warmth, richness, and yearning of Eleni Karaindrou's sound-world as well as its sonic detail.