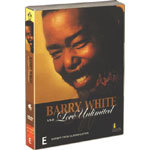 The man with the legendary satin smooth voice, Barry White, came to Frankfurt at the peak of his career in 1975. Accompanied by Love Unlimited (Glodean James (White), Linda James, Diane Taylor), the female vocal group which Barry formed in 1969, he enchanted the audience with a truly memorable concert performing some of his most celebrated declarations of love. Never, Never Gonna Give You Up, Barry!

Performances include :-
-Love's Theme
-Can't Get Enough of Your Love, Babe
-Never, Never Gonna Give You Up
-Rhapsody in White