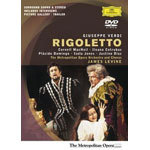 "Yes, Rigoletto is a singer's opera, but Verdi also poured into it some of his most dramatic as well as melodic music. That said, the vivid colours of the production have come up amazingly well and the sound is clear."
(MusicWeb Dec 2006)

The MET's second telecast to be launched on DVD is the production of Verdi's masterpiece "Rigoletto" from 1977; fans will clamour for this souvenir of the youthful Plácido Domingo singing "La donna è mobile" opposite lovely Ileana Cotrubas at her intense peak and Cornell Mac Neil's classic jester.

At the heart of this 1977 production lies the enigmatic world of the 16th-century Venetian painter Giorgione, which the director, John Dexter, took as his explicit visual cue.

Ileana Cotrubas had only recently made her Met debut, as Mimì, at the end of the previous season, but Gilda was one of her key roles at this time, and she went on to record the opera, with Domingo, for Deutsche Grammophon in 1979. She combined a naturally affecting tone and pinpoint accuracy (through all the challenges of "Caro nome") with a clear sense of the character's development as she fatally pursues her passion. Plácido Domingo was then at the peak of his early career, but the Duke of Mantua did not loom large in his repertoire: he had first sung the role in Hamburg in 1969, and only a few sporadic appearances in the early 1970s preceded this Met performance.

The production was highly enthusiastically received. Speight Jenkins, the noted critic and opera impresario, wrote of Cornell MacNeil's "Rigoletto" in the New York Post that "few have ever sung a more moving denunciation of the courtiers or a better Vengeance Duet with Gilda. His was a great Verdian interpretation… Dramatically [Domingo] and Miss Cotrubas did not make a false move, and the same can be said for Justino Díaz' ominous, well-sung Sparafucile, Isola Jones, the Maddalena… while John Cheek made a stirring Monterone. James Levine conducted with the command of Verdi that has so often been his trademark. His adherence to the composer's markings, his rhythm and his opening of the traditional small cuts in the opera all made for a superb musical performance."

"Rigoletto" is the third project of the expanded collaboration between Deutsche Grammophon and The Metropolitan Opera, which represents a major step in the rapidly growing marketing of opera on DVD. The forthcoming releases display an unprecedented concentration of star singers, musical excellence, and high production values that will set new market standards for DVD opera releases and ensure widespread critical and public attention for the emerging medium.

"Yes, Rigoletto is a singer's opera, but Verdi also poured into it some of his most dramatic as well as melodic music. That said, the vivid colours of the production have come up amazingly well and the sound is clear."
(MusicWeb Dec 2006)