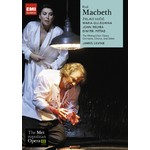 "An auspicious issue in first rate sound and vision further enhanced by an excellent "behind the scenes" documentary featuring the mainstays of this memorable January 2008 night at the MET." (ClassicalNet)

"Željko Lučić is a young, vibrant Macbeth. The focus of his acting and his singing is to evoke our sympathy for a noble soul who becomes corrupted, and he's broadly successful. His virile baritone is well contrasted with the cavernous bass of John Relyea who is the most exciting vocal presence here." (MusicWeb Nov 2008)

"Levine's conducting is incisive and insightful; he keeps the whole piece moving briskly along, but exerts a tight rein all along. Adrian noble's production may not please the purists, but his setting is very much in line with many unpleasant events in recent times. An auspicious issue in first rate sound and vision further enhanced by an excellent "behind the scenes" documentary featuring the mainstays of this memorable January 2008 night at the MET."
(ClassicalNet)

This is the Met's first production in 20 years of the first of Verdi's three operas based on Shakespeare's plays. It is "a stylistically eclectic, grimly effective and, at times, intriguingly playful production" (The New York Times) by the English director Adrian Noble, in his Met debut. Noble, former Artistic Director of the Royal Shakespeare Company, and set and costume designer Mark Thompson "mixed modern and melodramatic elements into this nearly black-and-white, modern-dress staging." (The New York Times)

At the time of its composition, Verdi's Macbeth was unique. Not only was it considered both musically and dramatically bold, but it was the first opera that could truly be described as Shakespearean. It was the first that altered operatic conventions to serve the play rather than converting the play into traditional operatic formulas. The Met performs Verdi's revised 1865 Paris version, minus the ballet he was obligated to write for that production.

After 33 highly successful years in charge of the company's musical forces, a relationship unique in the musical world today, the Met's Music Director James Levine conducts Verdi's haunting score with the intensity that this chilling work demands: "[Levine] conducts "Macbeth" as a … supreme musical drama. … Without diminishing the architectonic shape of the work, he is keenly sensitive to the vocal needs of the cast, ready in an instant to adjust the pacing, to coax the singer and orchestra musicians into beautifully coordinated execution of a lyrical phrase. The orchestra sounded terrific. In ruminative passages the string tone was … velvety and nuanced … [but] when red-blooded Verdian orchestral sound was called for, Mr. Levine summoned plenty of it. " (The New York Times)