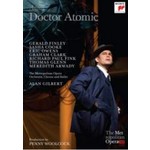 "Video and audio are state-of-the-art. This is a major addition to the operatic DVD catalog."
(ClassicalCdReview)

"Gilbert brings sparkle to Adams's tart woodwind counterpoint and great refinement to the strings, imbuing the scenes with Kitty Oppenheimer (Sasha Cooke) with unhurried lyricism. Richard Paul Fink excels as the tetchy Edward Teller, while Finley has made Oppenheimer his own. The sound quality is superb." (BBC Music)

"Doctor Atomic is about the month prior to testing the first nuclear bomb at Los Alamos July 16, 1945. Adams' opera, with a libretto by Peter Sellars, who also directed the production, chronicles the stress and anxiety of all concerned about creation of a weapon that could destroy the world-but possibly bring peace. Principal characters are Robert Oppenheimer and his wife Kitty, military and government leaders, and scientists working on the project. It is a powerful theater experience, with Adams' intense score perfect for the disturbing story. Doctor Atomic was premiered in San Francisco in October 2005. The Metropolitan Opera premiere was November 8, 2008, telecast nationwide; this is what is seen on this new DVD. It is an exciting performance magnificently sung by the entire cast, in particular Gerald Finley ,who created the role in the premiere, as Robert Oppenheimer . Finlay also was featured in the Netherlands Opera production reviewed on this site (REVIEW). The Dutch production featured an excess of newsreels and images; this revised production by Penny Woolcock eliminates obtrusive visuals. Unlike the Netherlands production, towards the final countdown, all present wear special glasses which create an eerie effect. Video and audio are state-of-the-art. This is a major addition to the operatic DVD catalog."
(ClassicalCdReview)

The Metropolitan Opera's Peabody and Emmy Award®-winning series The Met: Live in HD has excited audiences around the globe. Four highly-requested productions from the past two years are now available on DVD for the first time. These four stunning releases contain recordings of recent acclaimed Metropolitan Opera productions, taken from state-of-the-art, high-definition transmissions broadcast live from the stage of the Met, and include backstage interviews with the cast and production crew.

John Adams's mesmerizing score, in the powerful production of Penny Woolcock, tells the story of one of the pivotal moments in human history-the creation of the atomic bomb.