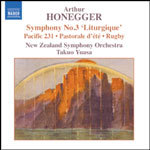 "His Third Symphony is one of his most powerful works, a purely musical requiem written towards the end of the Second World War and full of its horrors and its hopes for peace… The New Zealand Symphony Orchestra under Takuo Yuasa makes a highly convincing assault on this often relentlessly energetic music, helped by Wellington Town Hall's expansive acoustics."
-- Matthew Rye, The Telegraph, 7/8/04

"His Third Symphony is one of his most powerful works, a purely musical requiem written towards the end of the Second World War and full of its horrors and its hopes for peace… The New Zealand Symphony Orchestra under Takuo Yuasa makes a highly convincing assault on this often relentlessly energetic music, helped by Wellington Town Hall's expansive acoustics."
-- Matthew Rye, The Telegraph, 7/8/04

"Yuasa conducts the New Zealand Symphony Orchestra in a beautifully shaped and balanced performance, notably in the finale's transition from militaristic crescendo to ethereal calm."
-- Andrew Clark, The Financial Times, 14/08/04

"Despite some beautiful passages, it is an earnest piece, though the New Zealand Symphony Orchestra and Takuo Yuasa make the best possible case for it. Most enjoyable of all is the charming Pastorale d'été, performed here with tender delicacy."
-- Ivan Hewett, The Times, 21/08/04

Born in Le Havre on 10th March, 1892, Arthur Honegger was of Swiss-French parentage, an ancestry in many ways determining the nature of his music, far removed from the self-conscious gaiety and whimsicality frequently evoked by the other members of the Paris-based group Les Six. Studies at the Paris Conservatoire during 1911-18 instilled in him a love of counterpoint and fugal procedure, evident throughout his work, while a lifelong appreciation of the possibilities of technology is evinced in his extensive output for film and radio, not least Abel Gance's 1927 epic film Napoléon (Marco Polo 8.223134).

Despite the fact that his international career was launched in 1921 by the dramatic psalm Le roi David (Naxos 8.553649), and that operas and ballets occupied the major part of his creative thinking between the wars, Honegger is now best remembered for a sequence of vivid and increasingly dramatic orchestral works. During the 1920s and 1930s, these took the form of short tone poems and mood pictures, often with a specific evocation in mind. Latterly, the composer preferred more abstract titles, composing his First Symphony in 1930 and three further symphonies during the 1940s. Dating from 1951, the Fifth Symphony is among his last major works, a defiant statement by a composer who, undermined by serious ill health from 1947, was increasingly uncertain about the artist's rôle in a world haunted by the threat of its own destruction. He died in the Paris district of Montmatre, where he had lived since 1913, on 27th November 1955.

A tone poem depicting summer in the Alps above Berne, Pastoral d'été, prefaced by a quotation from Rimbaud, J'ai embrassé l'aube d'été (I embraced the dawn of summer), was a notable success at its première in 1920, and has remained one of Honegger's most performed pieces. Calmly undulating strings provide the backdrop for a ruminative horn melody, continued by oboe and complemented by graceful clarinet arabesques. Violins take up the theme, leading in a gradual crescendo to the central section of the piece, a livelier, folk-like theme shared between woodwind. Strings add their animated contribution, resulting in an overlay of 'folk' themes at the central climax. This quickly subsides, and the initial melody and rhythm return, albeit with reminiscences of the central section. A version of the 'folk' theme, sounding ethereal on flute, brings the piece to a gentle close.

Few pieces caught the mood of the time, and the imagination of musicians and public alike, as did Pacific 231 (1923), Honegger's graphic musical depiction of a train in motion, in which he expresses acceleration by decreasing note values, while actually slowing the tempo. The trajectory of the work is very simple. After a ghostly initial inhaling and exhaling on upper strings and woodwind, the rhythmic momentum gets under way in earnest. As the pulse-rate gradually increases, so does the stridency of the orchestration, with numerous rhythmically-defined gestures coalescing in ever-new patterns and combinations. Particularly notable is a tarantella-like woodwind idea, and an angular trumpet motif which constantly returns in new guises. At length everything comes together in a hectic tutti, with the brakes applied as the music slows inexorably to its final chord.