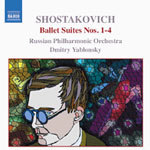 "Whether in waltz or gallop Shostakovich proves consistently full of verve and these performances, warmly recorded, are splendid ones"
(MusicWeb Nov 2004)

Although the symphonies, string quartets and concertos represent the core of his achievement, Shostakovich evinced sympathies right across the musical spectrum: hence his oft-repeated comment that he enjoyed all music from Bach to Offenbach. Moreover, the revival in recent years of such works as his 1958 musical Moscow-Cheryomushki attests to a composer who entered into the spirit of 'light music' with enjoyment and enthusiasm. Certainly the music on this disc will come as a surprise to those who know Shostakovich only as a 'serious' composer in the Beethoven tradition.

The four Ballet Suites occupy an equivocal position in Shostakovich's output. The Zhdanov Decree, issued by Minister of Culture Andrey Zhdanov as a directive from Stalin in January 1948, castigated Shostakovich, along with a number of leading Soviet composers, for 'formalist perversions' such as made their music unsuitable for the edification of the Soviet people. From then until Stalin's death in March 1953, Shostakovich wrote 'serious' music strictly for the desk drawer and occasional private performance. His public presence was denoted by a stream of film scores and patriotic pieces - never less than expertly crafted, but offering little or no indication of where his musical instincts truly lay.

It is from this perspective that the Ballet Suites should be assessed: light music, seemingly incapable of causing offence, which made ideal material for radio broadcasts and promotion through 'approved' Soviet outlets. Editing was carried out by Lev Atovmyan (1901-1973), Shostakovich's amanuensis over many years, who also arranged suites from a number of the composer's film scores and official compositions. That the constituent pieces were extracted mainly from ballets proscribed under the dictates of Socialist Realism was an irony of which those in charge were quite likely unaware.

Eleven of the 21 numbers here are taken from the ballet The Limpid Stream: actually the name of a collective farm, where a musicians' collective entertains the farm-workers in a succession of dance routines, held together by the flimsiest of plots, that ought to have been a sure-fire success. Its première in Leningrad during June 1935, followed by a Moscow staging that November, had indeed attracted favourable notices, but the falling-away of Shostakovich's reputation, following Pravda's denunciation of the opera Lady Macbeth of Mtsensk in January 1936, put paid to further productions.

That this ballet was ideally suited to the requirements of 'light music' is evident in Ballet Suite No. 1 (1950). After a moody Lyric Waltz taken from Jazz Suite No. 1 (Naxos 8.555949) and more fully orchestrated, there follow three numbers from The Limpid Stream: a Dance faintly reminiscent of the scherzo from Tchaikovsky's Fourth Symphony; a halting, wistful Romance delicately scored for woodwind and upper strings, and a lively Polka of the type to which Shostakovich had recourse frequently over the years. Next comes an insouciant Waltz-scherzo from the 1931 ballet The Bolt, and not included in the suite (also known as Ballet Suite No. 5, Naxos 8.555949), before a manic Galop from The Limpid Stream (and used as an interlude in Moscow- Cheryomushki) concludes the sequence.

Romeo and Juliet (highlights from the complete ballet)