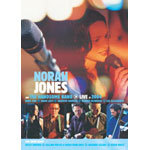 Norah Jones and the Handsome Band
Live in 2004

Shot over two days in August 2004 at Nashville's historic Ryman Auditorium, the concert film includes performances of most of the songs from Norah's triple platinum 2004 release "Feels Like Home", hits such as "Don't Know Why" and the title cut from her landmark debut album "Come Away With Me" as well as choice covers.

Special guests include Dolly Parton as well as Gillian Welch and David Rawlings.

Other songs on the DVD include covers of tracks like the Gram Parsons gem "She" and an all-star rendition of The Band's "Life Is A Carnival".

This DVD includes several behind-the-scenes mini-documentaries, music videos for "Those Sweet Words" (directed by David LaChapelle) and "What Am I To You?" as well as outtakes, full lyrics and more...

Shot on gorgeous 16mm film, "Norah Jones and the Handsome Band - Live in 2004" is mixed in 5.1 Dolby Digital Surround Sound, combining for a wonderfully warm home theatre experience. Done & Dusted produced the concert film and it was directed by Hamish Hamilton, an award winning director lauded as one of the world's top concert film artists and known for his work on productions for Madonna, U2, Robbie Williams, Oasis, Kylie Minogue, Usher amongst others.