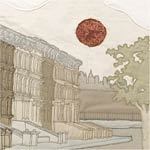 Channelling his country rock influences into articulate, witty ballads that come to life with gorgeous harmonies supplied by Emmylou Harris.

Conor Oberst is running on dangerous ground: getting his first Dylan comparisons at 12, frolicking with Winona Ryder, releasing two separate albums at once. It's a good thing he can write such haunting, intimate songs.

I'm Wide Awake, It's Morning (released simultaneously with Digital Ash In A Digital Urn) is the album the Omaha native has always threatened to make, channelling his country rock influences into articulate, witty ballads that come to life with gorgeous harmonies supplied by Emmylou Harris.

The tumbling "We Are Nowhere and It's Now" might be his first actual masterpiece, while the words of album closer "Road To Joy" ("I could've been a famous singer if I had someone else's voice/ But failure's always sounded better") indicate that Oberst might have his head screwed on straight after all.

Conor Oberst, AKA Bright Eyes, is renowned in the US as one of the 'boy genius' songwriters of his generation. The Bright Eyes maestro is only twenty-four, but he's broken a career's worth of hearts, strumming his acoustic guitar and chronicling his romantic torments.

He commands a cult of hot, sullen Conorites who would gladly crawl through broken glass to lick his plectrum. And though he is constantly offered large deals with major labels he still sticks to the tiny indie label he helped establish in 1993, when he was just a thirteen-year-old Omaha, Nebraska, kid peddling his home demos.

Is This It
more suggestions…