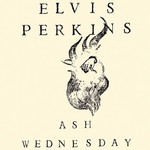 "There's something about this album… that takes listeners by the hand, smacks them into reality and reminds them they're still alive.”
- Filter (9/10)

"At its best 'Ash Wednesday' recalls the command of Arcade Fire's 'Funeral', as Perkins finds empathy through his whimsy-fuelled, sad-bastard songs of experience.”
- Village Voice (7/10)

Elvis Perkins' debut album feels both lived in and lived through, combining emotional intimacy with a warm-hearted studio sound that recalls Nick Drake and 'Astral Weeks'-era Van Morrison. 'Astral Weeks' - an evocative mix of folk, rock and jazz with a naturalistic flow of words - was a touchstone, in terms of feel and sound. "We wanted to make a human-sounding document,” Perkins says of their decision to record in analogue.

'Ash Wednesday' started life as a collection of home-made demos, before being fleshed out with friends in a studio and at a Victorian house in L.A. The resulting material is a beautiful album in which Perkins transforms circumstances of his personal life into compelling, dream-like songs with lyrics that teeter between the specific and the surreal.

Perkins cut 'Ash Wednesday' with his actor-musician brother Osgood on drums and friend Ethan Gold arranging and producing. Recording was very spontaneous in approach, with much of the album, including vocals, consisting of live takes. Veteran drummer Gary Mallaber, who appeared on Van Morrison's 'Moondance', guests on a few tracks and heard "While You Were Sleeping" for the first time as he performed on it!

For 2006 / 2007, Perkins, alongside his three-piece band known as Elvis Perkins in Dearland, has been doing dates in the USA to increasing acclaim; touring with such acts as Okkervil River, Dr. Dog, Matt Costa and Pernice Brothers; and appearing at events like Seattle's Sasquatch! Festival, Lollapalooza and Austin City Limits.

"Perkins has his own stories to tell and he often does so in a mesmerizing fashion.”
- Boston Globe

Till the Sun Turns Black