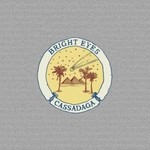 This is Conor Oberst and his band's most confident work so far - an album so full of soaring strings and female harmonies that it feels almost buoyant in comparison to previous releases.

Bright Eyes is a band consisting of a rotating lineup of collaborators drawn primarily from Omaha's indie music scene. The group are led by Conor Oberst, a singer / songwriter who rivals Ryan Adams for sheer volume of output - though his intimate, earnest music draws listeners further in than Adams' faux-retro ever could.

Once tagged "rock's boy genius" by the music press, Conor Oberst turned 27 on February 15th 2007 and even without that in mind it's hard to listen to Cassadaga without hearing a newfound sophistication to the Bright Eyes sound. Producer, multi-instrumentalist and permanent band member Mike Mogis has crafted a swirling, euphonious record, at times bursting with bombastic confidence and country swagger, and at others loose-limbed and mesmeric. Trumpet and piano player Nate Walcott, a Bright Eyes player since 2003 and now the third permanent member, is responsible for the cinematic string arrangements.

Other than a handful of live appearances and the release of a collection of B-sides & rarities, Bright Eyes kept mostly out of sight in 2006 after the busy 2005 which saw the simultaneous release of the sister albums 'Digital Ash in a Digital Urn' and 'I'm Wide Awake, It's Morning'. Recording for the first time outside of the Lincoln, NE studio belonging to Mogis, the Bright Eyes cast of players were busy in studios in Portland, OR, New York City, Chicago and Los Angeles. The result is the band's most confident work so far - an album so full of soaring strings and female harmonies that it feels almost buoyant in comparison to previous releases.

While many latched onto the smattering of political commentary in 2005's 'I'm Wide Awake...', 'Cassadaga' is less blunt in its depiction of youthful exasperation in the Bush era. References to Hurricane Katrina, holy wars and polar ice-caps may crop up, but they're buried deep amongst the ruminations on life, love, history, death and the afterlife.

If 'I'm Wide Awake...' was "the New York City album", then 'Cassadaga' is "the America album", in which Oberst diaries his travels around the country and articulates his sense of history in the landscape. In first single "Four Winds" he is "off to old Dakota where genocide sleeps/in the Black Hills, the Badlands, the calloused East/I buried my ballast, I made my peace." 'Cassadaga' itself crops up in the same song. The town, a community for psychics in central Florida, is visited in order to "commune with the dead". This wandering spirit is crystalized in "I Must Belong Somewhere" a song which was already a staple of live shows by the end of the 2005. "Hot Knives" is particularly spirited, bringing to mind the true energy of a Bright Eyes show. Likewise, "Soul Singer In A Session Band" - a rousing paean to an oxymoronic profession - enlists all of the elements which make the Bright Eyes live band such a euphoric experience. "Make A Plan To Plan To Love Me" is Bright Eyes at their most playful; a straight-up love song, replete with girl group vocals and Burt Bacharach strings. Oberst, the fumbling guitarist whose impassioned prose tumbles out under stark stage spotlights, is still recognizable in every track, but the songs are rich with elaborate production, cinema-sized orchestration and, at times, sprawling, almost psychedelic, atmospherics.