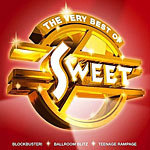 Sweet
The Very Best of Sweet

This is an excellent 20-track collection featuring Sweet's biggest hits (including "Blockbuster", "Ballroom Blitz", "Wig Wam Bam" and the hard-to-find "Love is Like Oxygen"), along with some of their hard hitting album cuts.

"This is definitely the best Sweet compilation on the market! It is an excellent 20-track collection featuring Sweet's biggest hits (including "Blockbuster", "Ballroom Blitz", "Wig Wam Bam" and the hard-to-find "Love is Like Oxygen"), along with some of their hard hitting album cuts.

Combining ostentatious stage attire with catchy rock riffs, The Sweet were one of the frontrunners of the glam explosion (along with Marc Bolan and David Bowie) that dominated the early 1970s. Often disregarded as a mere bubblegum pop group, Sweet were talented musicians who could play as well as (if not better!) than their hard rock contemporaries. Their live shows were loud, stunning extravaganzas and they were all good singers too - the multi-layered vocal harmonies of Connolly, Priest, Scott and Tucker preceded the likes of Queen.

Sweet continued to stay popular, penning their own songs (such as "Love Is Like Oxygen"), until the end of the seventies when lead singer Brian Connolly split from the group. Scott, Tucker and Priest kept the band going, and in 2007 there is still Andy Scott's Sweet (he being the only original member in the group).

Sadly Mick died of bone cancer on 14th February 2002, five years after Brian Connolly who passed away on 9th February 1997, due to alcoholism. Fortunately their loud, fun, catchy music lives on for us all to enjoy! "Are you ready, Steve?, Andy?, Mick? Well all right fellas, let's go..."
- GEOFF