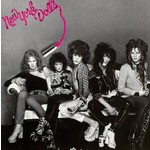 "The CLASSIC 1972 debut from the one and only New York Dolls is ranked at number 213 on Rolling Stone magazine's list of the 500 greatest albums of all time. Produced by sonic genius, Todd Rundgren, the glam / punk rock masterpiece has influenced countless groups over the past three decades.

This is rough and ready rock 'n' roll, encased in the flash 'n' trash of lipstick and platform boots - as captured perfectly in the NYD anthems "Personality Crisis" and "Looking for a Kiss". Johnny Thunders, Jerry Nolan and Arthur "Killer" Kane are long gone, but the 'New York Dolls' record remains, as cool as ever!"
- GEOFF (8th July, 2009)

The Very Best of Sweet