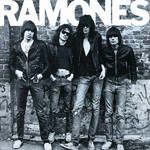 Available as an American import, this special edition of the Ramones' self-titled debut has been re-mastered and expanded to include not only the original 14 songs, but also 8 BONUS tracks - including 3 previously unreleased demos.

"The Sex Pistols - the first punk rockas? Feggedaboudit! Punk is as American as the Ramones (not to mention Iggy and Patti), who formed in Forest Hills, New York, in 1974. Gee, they were already onto their third LP when The Pistols were still working on their debut, 'Never Mind The Bollocks'.

Expanding on their '60s U.S. pop & garage-band influences while sneering at the bloated state of "mainstream" rock at the time, Joey, Johnny, Dee Dee, and Tommy virtually invented the loud 'n' snotty punk style and 'tude that was later to become so prevalent with many a youth of the day. They paid their dues playing in Bowery dives like the legendary CBGB club, before scoring a deal with Sire Records. Despite never achieving huge commercial success, the Ramones did go on to have a lengthy career that produced dozens of "classic" tunes, and endeared them to many.

These energised songs were permeated with a bubble-gum sensibility, augmented perfectly by their unique, cartoon look - a uniform of ripped denims, leather jackets and pudding bowl haircuts. Their fast-and-hard playing would reach extremes in live performance as the breakneck speed could slice the running time of songs considerably. You could say that the primal Ramone sound is a kind of blueprint for all things resembling catchy, ear-bleeding punk rock, although like their contemporaries, these days it doesn't sound that raucous.

It gets better too... This re-mastered special edition of 'Ramones' has actually been expanded to not only include the original 14 songs, but also 8 BONUS tracks - including 3 previously unreleased demos.

If you think of the Ramones as loud and stupid, you're only half-way right. By their 2,263rd and final concert in 1996, these punk forefathers had outsmarted and outlasted most of their detractors. However, at the time of this writing it is sad to see that three of the four original heroes (Joey, Dee Dee and Johnny) have all passed on. But, perhaps this affirms that they ultimately lived to be a Ramone... There will certainly never be another band quite like them."
-GEOFF & MARTY (16th April 2005)

The Words Will Write Themselves