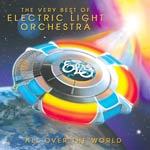 20 of their very best and most popular tracks, all newly re-mastered by Jeff Lynne. This fine compilation contains 12 Top 20 NZ singles!

'All Over The World' features 20 of the very best and most popular tracks from ELO, all newly re-mastered and approved by Jeff Lynne. This fine compilation contains 12 Top 20 NZ singles and also included are new liner notes, written by Jeff.

An incredible 35 years since their formation, the music of the Electric Light Orchestra is still as popular as ever. All over the world, people are tuning into the sound of ELO via radio, the internet, cinemas and TV. The seemingly ageless songs of ELO are even being heard again in the singles charts, thanks to the cream of today's young dance acts sampling the band's original music and turning on a whole new generation of fans.

ELO recorded twelve original studio albums and released twenty-eight hit singles in the UK alone. At their peak between 1974 and 1981, ELO amassed a string of nine consecutive gold, platinum and multi-platinum albums. The band were one of the biggest arena and stadium draws during the seventies and early eighties, with spectacular shows including massive flying saucer stage sets and vibrant light and laser displays.