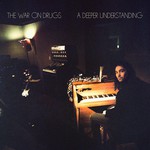 The War On Drugs
A Deeper Understanding

This is the band's first album since 2014's universally acclaimed 'Lost In The Dream'.

For much of the three and a half year period since the release of 'Lost In The Dream', The War On Drugs' frontman, Adam Granduciel, led the charge for his Philadelphia-based sextet as he holed up in studios in New York and Los Angeles to write, record, edit, and tinker - but, above all, to busy himself in work. Teaming up with engineer Shawn Everett (Alabama Shakes, Weezer), Granduciel challenged the notion of what it means to create a fully realized piece of music in today's modern landscape.

Calling on his bandmates - bassist Dave Hartley, keyboarding Robbie Bennett, drummer Charlie Hall and multi-instrumentalists Anthony LaMarca and Jon Natchez - continuously throughout the process, the result is a "band record" in the noblest sense, featuring collaboration, coordination, and confidence at every turn.
Through those years of relocation, the revisiting and re-examining of endless hours of recordings, unbridled exploration and exuberance, Granduciel's gritty love of his craft succeeded in pushing the band to great heights.