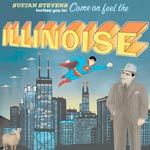 Stevens weaves variegated musical styles - jazz, funk, pop, folk and Rodgers & Hammerstein-like flourishes - and the textures of 25 instruments into a tapestry of persons and places famous, infamous, iconic and anonymous.

Like the self-proclaimed "Spiderman" who climbed Chicago's Sears Tower with no harness, Sufjan Stevens scales dusty prairies, steel factories and two hundred years of history in the 2nd installment of his grandiose 50 State Project, 'Illinoise', or as it says on the tin, 'Come On Feel The Illinoise', an incredibly ambitious 22-track anthematic tone poem to the Prairie State.

An engrossing musical roadtrip, 'Illinois' takes you through ghost towns, grain mills, hospital rooms and the City of Broad Shoulders, with guest appearances by a poet, a president, a serial murderer, UFOs, Superman and the goat that cursed the Cubs.

His shoulders broaden, mind quickens and heart beats with quiet, patient thumps in a rhythm as fluid and faithful as the Chicago River.

1. Concerning the UFO sighting near Highland, Illinois
2. The Black Hawk War, or, How To Demolish An Entire Civilization and Still Feel Good About Yourself in the Morning, or, We Apologize for the Inconvenience But You're Going To Have To Leave Now, or, "I have fought the Big Knives and will continue to fight them till they are off our lands!"
3. Come On! Feel the Illinoise! / Part I: The World's Columbian Exposition / Part II: Carl Sandburg Visits Me In A Dream
4. John Wayne Gacy, Jr.
5. Jacksonville
6. A short reprise for Mary Todd, who went insane, but for very good reasons
7. Decatur, or, Round of Applause for Your Step-Mother!
8. One last "Whoo-hoo!" for the Pullman
9. Chicago
10. Casimir Pulaski Day
11. To The Workers of The Rock River Valley Region, I have an idea concerning your predicament, and it involves an inner tube, bath mats, and 21 able-bodied men
12. The Man of Metropolis Steals Our Hearts
13. Prairie Fire That Wanders About
14. A conjunction of drones simulating the way in which Sufjan Stevens has an existential crisis in the Great Godfrey Maze
15. The Predatory Wasp of The Palisades Is Out To Get Us
16. They Are Night Zombies!! They Are Neighbors!! They Have Come Back From the Dead!! Ahhhh!
17. Let's hear that string part again, because I don't think they heard it all the way out in Bushnell
18. In This Temple As in The Hearts of Man For Whom He Saved The Earth
19. The Seer's Tower
20. The Tallest Man, the Broadest Shoulders / Part I: The Great Frontier / Part II: Come to Me Only With Playthings Now
21. Riffs and Variations on a single note for Jelly Roll, Earl Hines, Louis Armstrong, Baby Dodds, and the King of Swing, to name a few
22. Out of Egypt, into the Great Laugh of Mankind, and I shake the dirt from my sandals as I run

The Avalanche - Outtakes and Extras From the Illinoise Album

The Sad Machinery of Spring