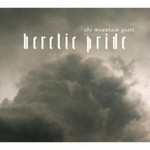 From the creative brain of John Darnielle come 13 gripping songs that ooze backwoods desperation. "...dark and intense, but all the more loveable for it!"-Christchurch Press.

"It's a future classic, an underground treasure... and my new favourite record." The Modern Music.

"If you're a fan of the quiet backwoods desperation of Bonnie 'Prince' Billy or the literate strangeness of Sufjan Stevens then this album might be for you."
- BBC UK

'Heretic Pride' from John Darnielle's band The Mountain Goats contains 13 songs, written in a wide variety of places around the US and embracing many different subject matters - a pulp spy novel writer, an imaginary cult, breakup sex, a lake monster, Prince Far I, slasher films and many other tales and stories from the creative brain of John Darnielle.

The album was produced by Scott Solter and John Vanderslice, recorded by Solter and Aaron Prellwitz at Prairie Sun and was also mixed by Solter. The lyrics, as always, are central to the whole enterprise. Many of the songs involve desperate characters who've found themselves in some trouble and want to moan about it a little before taking their lumps. The sexual tension between characters in your average Mountain Goats song could split the atom if the power could be harnessed, but it can't, so forget it. Now you know what it's all about you've no excuses for missing out...

" 'Heretic Pride' is dark and intense, but all the more loveable for it!"
- Christchurch Press