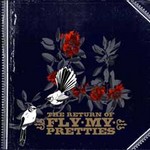 A 'live-record' of the musical collaboration which was performed and recorded across eight unforgettable shows at The Paramount (Wellington) and Hopetoun Alpha (Auckland) in September and October 2005.

"A compilation of talent and songs that sets new standards for local shows."
- Metro

LOOP Recordings Aot(ear)oa is pleased to announce the release of The Return of Fly My Pretties: A CD 'live-record' of the musical collaboration which was performed and recorded across eight unforgettable shows at The Paramount (Wellington) and Hopetoun Alpha (Auckland) in September and October 2005.

Fly My Pretties first entered our hearts and minds in 2004, with the idea from The Black Seeds' front-man Barnaby Weir and co-conspirator Mikee Tucker, to assemble a talented and exciting group of Wellington-based musicians for a 'one-off' project. The objective: To meet, exchange ideas, and then perform and record the results in front of a live audience.

Creating an atmosphere especially for the theatre, Fly My Pretties performed their first season at Wellington's BATS Theatre over five nights. It was a hit, and Fly My Pretties became Bats' most attended event of 2004. Likewise, the album 'Fly My Pretties: Live at Bats' (LP024) became one of LOOP's most successful releases to date achieving gold-status, receiving 6 B-Net nominations (winning Best Pop Album), and being released internationally in the UK.

Building on last year's event, The Return of Fly My Pretties sees key members of the original cast reunite, and meet with new faces from the Wellington music scene. With the repertoire encompassing a diverse range of styles from folk-roots, to reggae, rock, new-soul, and blues, The Return of Fly My Pretties sees a wide range of musical influences converge in writing and performance to create something altogether unique and special. The tracks on the CD represent the best takes from the sell-out season, and have been un-altered so that the listener gets the chance to relive the magic of the performances.

"I was dumbstruck, in awe and, ultimately, moved. It was that damn good."
- Real Groove magazine

The Walls of the Well

The Onus of Sand
more suggestions…