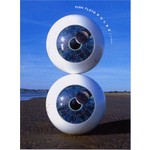 'Pulse' is a recording from the band's run of 14 shows at London's Earl's Court, their final full concerts performed (to date). A lot of work has been done to improve the sound and picture quality of this DVD release, and to source a selection of suitable extras.

Along with the menus and screens, the DVD cover has been designed by Storm Thorgerson, and as you can see is a variation on the "balls" picture used to promote the 2003 Interstellar exhibition in Paris.

Pink Floyd's well-respected engineer James Guthrie is the man who has created the surround sound mixes, and the new Dolby Digital 5.1 re-mastered soundtrack is superb.

With behind-the-scenes footage, a photo gallery, plus loads more this historic release is nothing short of being essential viewing for the band's legions of die-hard fans!

DVD One :-
-Concert Part 1 :-
Shine on You Crazy Diamond
Learning to Fly
High Hopes
Take it Back
Coming Back to Life
Sorrow
Keep Talking
Another Brick in the Wall (Part 2)
One of These Days

-Bootlegging the Bootleggers :-
What do You Want From Me
On the Turning Way
Poles Apart
Marooned

-Videos :-
Learning to Fly
Take it Back

DVD Two :-
-Concert Part 2 :-
Speak to Me
Breathe
On the Run
Time
The Great Gig in the Sky
Money
Us and Them
Brain Damage
Eclipse
Wish You Were Here
Comfortably Numb
Run Like Hell

-Alternate Screen Films :-
The Great Gig in the Sky (Animation)
Us and Them 1994

-Behind the Scenes Footage :-
Say Goodbye to Life as We Know It

-"Wish You Were Here" With Billy Corgan