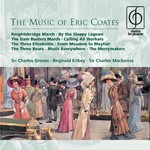 "Many well-known Coates pieces here but you could buy this purely for the Saxo-Rhapsody recording and be more than satisfied - this IS the most beautiful orchestral piece for saxophone ever written in my opinion" (Amazon.co.uk)

Coates's music, with its simple and memorable melodies, proved particularly effective for theme music. As well as "Knightsbridge", the BBC also used Calling All Workers (1940) as the theme for the radio programme Music While You Work, and By the Sleepy Lagoon (1930) is still used to introduce the long-running radio programme Desert Island Discs. Coates' "Halcyon Days", the first movement of the suite The Three Elizabeths, was used as the theme to the popular 1967 BBC TV series The Forsyte Saga, although he received no credit. This piece was originally written in the early 1940s. It was later used as a celebration of the Coronation of Queen Elizabeth II.