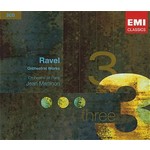 "Fortunate the collector who chances on this set; delight and revelation await. At bargain price this is a gift that will cast its smiling spell for years to come"
(MusicWeb Bargain of the Month October 2007)

"Martinon's Ravel is joyously liberated. Atmosphere and the recreation of front-to-back and left-to-right depth continues to work as well as it did on the original black vinyls. Of course these were performances taken down onto analogue stock but aside from an unassertive tape hiss, only audible when you drive the loudspeakers really hard, there are no untoward results and nothing approaching distortion.

Martinon was born in 1910 in Lyon. He studied with d'Indy and Roussel playing the violin in the Paris Conservatoire Orchestra. After further studies at the Sorbonne he worked with Munch and Désormière. In the Second World War he served with the French Army and was taken prisoner in 1940, spending two years in a POW camp escaping three times. While in captivity he wrote a symphony (the first of five), a motet Absolve domine in memory of French musicians who died in the war and a setting of Psalm 136 which became known as Chants des Captifs. Release in 1943 saw him appointed conductor of the Bordeaux orchestra and then, as assistant to Munch, at the Paris Conservatoire Orchestra. He was principal conductor of the ORTF Orchestra from 1968 until his death. We tend to forget that the present recordings were made within a couple of years of Martinon's death in 1976 though they show no sign of palling imagination. Martinon's elegance and sound technique were a byword in the profession. His interpretations are strong on clarity. He was mild of temperament and was not inclined to dive into the sort of blazing rows so relished by some conductors. To some degree he came to regret that he was so strongly associated with French music rather as Boult and Handley have been so tightly bound up with English music. Martinon hankered to conduct Mahler but death intervened.

The playing for Martinon is hallmarked by tubby French brass and woodwind but the Boléro is stupendously raw and ultimately brash; lacking - thank heavens! - the limousine refinement of Karajan. The shimmer and tidal pull of the sea is clear from Barque sur l'océan with a Frank Bridge parallel at 1.45 (The Sea). In the case of Ma Mère l'Oye I am not quite wooed away from the lovely Monteux recording but this is the complete ballet. The more I hear this work the more I regard it as a masterpiece of the gentlest beauty. In the case of Jardin Féerique this magic is coupled with the triumph of the carillon and richly-swept horn glissandi.

Fortunate the collector who chances on this set; delight and revelation await. At bargain price this is a gift that will cast its smiling spell for years to come"
(MusicWeb Bargain of the Month October 2007)

Coates: The Music of (Incls the London Suite, The Dam Busters March & the Three Bears Phantasy)