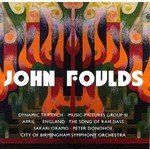 "The delightfully relentless tread of the Foulds Edition ... a disc not just for British music buffs but for anyone who values music of stunning originality and otherworldly beauty"
(Recording of the Month MusicWeb June 2006)