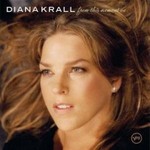 Diana Krall
From This Moment On

This album is an eleven-song collection that captures the Canadian-born sensation in full swing, in great company, and at the top of her game.

Cole Porter's romantic ode to great expectations (with its hip, heartening couplet, "No more blue songs / only whoop-dee-doo songs") could not be more apt a title track for Krall's tenth album. 'From This Moment On' is an eleven-song collection that captures the Canadian-born sensation in full swing, in great company, and at the top of her game. It could also be called her strongest, most cohesive release to date.

In songs, mood and delivery, 'From This Moment On' reveals Krall's personal ardor for that golden era of song-making, when Frank Sinatra, Ella Fitzgerald and (especially) Nat "King" Cole were in their prime. It's musical territory that Krall has often explored, but this album was certainly not a case of simply repeating past formulas: Krall's A-team of support - producer Tommy LiPuma, engineer Al Schmitt and arranger / bandleader John Clayton - were on hand to ensure that inspiration was kept on an edge, unhindered by the studio environment.

"This album coincides with a happier time in my life. I think it's very obvious in the music. It reflects how I'm feeling now, the joy that I have in my marriage and family, and hopefully in the future."
- Diana Krall

The Road to Escondido