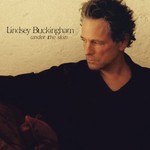 Lindsey Buckingham
Under the Skin

Focusing almost purely on vocals & acoustic guitar, with minimal percussive or production elements, 'Under the Skin' was created almost solely by Lindsey Buckingham himself, although Mick Fleetwood & John McVie guest.

'Under the Skin' was the first solo album for several years - since 'Out of the Cradle' (1992) - for the Fleetwood Mac guitarist / singer / songwriter. Rolling Stone has stated that Lindsey Buckingham is one of rock's most undervalued visionaries. He has had a 30-year career both as solo artist and as a member of the aforementioned Fleetwood Mac, who remain one of the most popular bands of all-time.

Focusing almost purely on vocals & acoustic guitar, with minimal percussive or production elements, 'Under the Skin' was created almost solely by Lindsey (Mick Fleetwood and John McVie guest) and is another masterpiece from the man.

"Wow, this release is better than anything I could have hoped for from the man who helped put Fleetwood Mac on the world map; and who created such colourful "solo" albums as 'Law & Order' + 'Go Insane'...

'Under the Skin' contains that distinctively ethereal vibe that inhabits all of Lindsey Buckingham's work. However, it's emphases on mainly his voice & acoustic guitar picking works his mojo on a whole different level. The resultant vibe reminds me of the sort of magic felt the first time I experienced 'Led Zeppelin 3'.

This is a reflective, whimsical & folky recording, but one that is still firmly rooted within the "pop" sensibilities of such "classic" albums as the Mac's 'Rumours'; 'Tusk'; 'Mirage'; and 'Tango in the Night'. Songs like "Not Too Late"; "It was You"; "Cast Away Dreams"; and "Down on Rodeo" are superbly crafted and remind us once again of the true artistry of this most subtle of minstrels. Lindsey may not be the most prolific, but he remains one of the more distinctive, and 'Under the Skin' is a lofty recording of pure excellence."
-MARTY (12th November, 2006)

Half the Perfect World

Tango in the Night