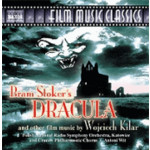 Kilar had worked on over a hundred Polish films before scoring his first American film, Francis Ford Coppola's Bram Stoker's Dracula, followed by acclaimed scores for Roman Polanski's Death and the Maiden and The Ninth Gate, typified by expressive themes and minimalist harmonies.

Born in Lvov, formally Poland, now Ukraine, on 17th July, 1932, Wojciech Kilar studied at the State Higher School of Music in Katowice, moving to Paris in 1959 to study under Nadia Boulanger at the Conservatoire. The recipient of numerous international awards, including the Lili Boulanger Memorial Fund Award in 1960, and two awards from the Polish Minister of Culture in 1967 and 1976, Kilar scored his first film in 1960, and went on to write music for Poland's most acclaimed directors, including Krzysztof Kieslowski, Krzysztof Zanussi, Kazimierz Kutz and Andrzej Wajda.

Kilar had worked on over a hundred Polish films before scoring his first American film, Francis Ford Coppola's Bram Stoker's Dracula, followed by acclaimed scores for Roman Polanski's Death and the Maiden and The Ninth Gate, and Jane Campion's Portrait of a Lady, typified by expressive themes and minimalist harmonies. As well as his film work, Kilar continues to write concert music, including a Horn Sonata, a Wind Quintet, the epic cantata Exodus [Naxos 8.554788] used as the trailer for Schindler's List, and a Piano Concerto. Kilar's first film score in the 1960s, The Debutant, coincided with the radical heyday of the Warsaw Autumn Festival. In 1974, the musical simplification of the orchestral work Krzesany [Naxos 8.554788] was anticipated by a series of scores for Krzysztof Zanussi's films. In this way, the two main strands of Kilar's creative output can be seen to have penetrated and influenced each other.

Kilar's film music is, by necessity, one of limitation. Given the medium, the composer cannot have a creative free hand. Film music must be discreet, occurring only where it deepens the psychic states of characters or intensifies the dramaturgy of a given moment, conveying the essence of the work in the process. Put another way, good film music should not try to dominate the viewer's perception. It cannot create a parallel narration and, because of this, the composer has consciously to limit his creative potential. From this perspective, one can admire the strength of expression of Kilar's film scores: clarifying and deepening those scenes which cannot be expressed either in pictures or words, and where music can function with all its power.

Thanks in part to its powerful music, Bram Stoker's Dracula (1992) was acclaimed as one of the most authentic versions of the Dracula story, and won Kilar the ASCAP Award. Beside the horror element, it has some evocative music surrounding the more 'gothic' aspects. One instance is the Prokofiev-like 'The Brides', passionately thrusting strings over moody piano and percussion, which opens the suite. By contrast, 'The Party' is awash in delicate tracery for violins and glockenspiel, almost make-believe in its air of fantasy. A depiction of the two heroines in the film, 'Mina/Elizabeth' is a fine example of Kilar's melodic gift, recalling composers as different as Khachaturian and Arnold in its scoring for strings and harp. Over a relentless, Mars-like rhythmic ostinato, 'Vampire Hunters' conjures up an air of foreboding. 'Mina/Dracula' underscores the dénouement of the film, strings rising from the depths, to be joined by wistful cor anglais and flute in an atmosphere of calm inevitability. Then 'The Storm' bursts in with Herrmann-like jabbing violins and a steady march rhythm, over which the chorus intones a menacing chant which vividly evokes the forces of darkness.

König der letzten Tage (The King of the Last Days) tells of the rise and fall of the false prophet John of Leyden, who, as leader of the Anabaptists, set up a short-lived New Jerusalem in Münster during 1534. The opening 'Intrada', opulently scored for strings, graphically invokes biblical imagery and religious intrigue. 'Sanctus' depicts the intense emotions of the Anabaptist zealots, with another of Kilar's characteristic choral chants. 'Canzona' is an elegiac interlude in the drama, cor anglais and harpsichord combining poignantly with strings. Over pounding timpani and slashing percussion, 'Miserere' underlines the emerging conflict between the religious establishment and the rebels. Music of a more prayerful nature is to be heard in 'Agnus Dei', sung unaccompanied in the tradition of medieval choral writing. The final defeat of the rebels is depicted in the 'Gloria', which effectively draws together aspects of mood and music from across the film score.

Death and the Maiden (1994), directed by Roman Polanski, is a psychological thriller based on the acclaimed play by Ariel Dorfman, in which Paulina Escobar, a political torture victim, identifies the man who gives her husband a lift home as the person who raped her fifteen years earlier. She then sets about exacting revenge on her torturer in her home. The three-person, single-set drama makes for an emotionally-wrenching experience. Of the three numbers presented here, 'The Confession', in which sections of the string orchestra are laid simply but emotively over each other, underscores the scene of emotional recognition between Paulina and Roberto. With its sad cor anglais melody, contrasting with more dissonant elements, 'Paulina's Theme' evokes the persona of a woman who has been forced to endure much sorrow. 'Roberto's Last Chance' strikes a mood of Shostakovich-like aggression as the film's emotional climax is reached.

The Beads of One Rosary (1980), directed by Kazimierz Kutz and adapted from his own novel, is set in a provincial Polish town. Habryka is an old miner who has won many worker's medals and has now retired. In order to build new apartments, old houses are being cleared away, and the residents given flats in the new high-rise complex. Habryka, however, thinks his house has too much history, and refuses to leave, only giving in when the irate head of the mine bribes him with a new house. Unfortunately, this is in a remote location and the old couple are lonely. Habryka dies in his sleep, and - a touching irony - receives a hero's funeral as a homage to one of the oldest miners in the district. Much of the film's poignancy of atmosphere and emotion is distilled into the short mood-piece featured on this disc, where the piano evokes a sense of time passing, with trumpet and high woodwind joining in a wistful waltz for times past.

Pearl in the Crown (1972), also directed by Kazimierz Kutz, is among the lesser known of Kilar's film scores. Made in the aftermath of industrial unrest across Poland in 1970, it looks back to similar troubles during the 1930s. The owners of an unprofitable Silesian coal-mine decide to close it down by flooding, and the miners' union responds by occupying the pit. What begins on a note of hope and high spirits, however, is eventually broken by government indifference, starvation and despair. The film reflects past and present through its tribute to the power of collective action and individual commitment. As taken from the original score, cue numbers 26-27 depict an encroaching revelation with particularly effective use of untuned percussion, while cue number 28 is a further example of the emotionally-charged string writing with which Kilar has become synonymous in the domain of film music.

All This, and Heaven Too / A Stolen Life

Treasure of the Sierra Madre (The)
more suggestions…