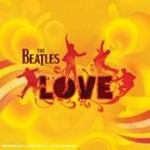 This wonderful audio collage offers a way of re-living the whole Beatles musical lifespan in a very condensed period - in the best possible sound quality!

Apple Corps Ltd / EMI Music proudly announces the release of 'LOVE', the new CD from THE BEATLES - as you have never heard them before!!

Initially asked to create experimental mixes from the original master tapes for a collaboration with Cirque Du Soleil, Sir George Martin, the Beatles legendary producer, and his son Giles have been working with the entire archive of Beatles recordings to create 'LOVE'.

Using the original four tracks, eight tracks and two tracks at EMI's Abbey Road Studios, Sir George and Giles have created a unique soundscape that re-kindles our love of The Beatles' music that has been so much part of our lives since it was first released. What people will be hearing on the album is a new experience, a way of re-living the whole Beatles musical lifespan in a very condensed period, in the best possible sound quality!

Ringo Starr and Paul McCartney, along with Yoko Ono Lennon and Olivia Harrison, have given their support and approval to the release.

"This music was designed for the 'LOVE' show in Las Vegas but in doing so we've created a new Beatles album" said Sir George. "The Beatles always looked for other ways of expressing themselves and this is another step forward for them."

Because of the Times