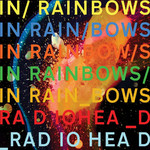 Radiohead had previously only made this music available via download from their website. Thankfully, they've now released 'In Rainbows' on CD! Pretty much universally loved by everyone here at Marbecks Records, this one comes highly recommended indeed.

'In Rainbows' has received with huge acclaim in the press:
"'In Rainbows' is a brilliant work. Once again Radiohead have proved themselves priceless".
-Q

"Radiohead were always untouchable. For now, one of their finest albums is too."
-THE WORD

"Artistically and in terms of a new business model, 'In Rainbows' is a necessary masterstroke."
-MOJO

"This is the best Radiohead album since 'OK Computer'."
-NME

"'In Rainbows' is priceless."
-THE SUN

"A very important album that doesn't flaunt its own sense of import? Now that's really innovative."
-THE OBSERVER

"This sees the band at the top of their game."
-MUSIC WEEK

"Considering its four-year creation, the fact they're virtually giving it away, and the risk that 'Eraser' had purloined some of Yorke's best tunes of recent times, the first real surprise of 'In Rainbows' is how assured it all sounds... an album which reins in its askew rhythms, fizzing electronics and elegant guitars, and lets the songs breathe deep... a tremendous album, even in its darkest corners."
-RUSSELL BAILLIE, THE HERALD