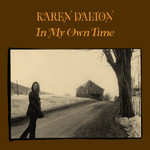 Karen Dalton
MARBECKS RARE: In My Own Time

The late Karen Dalton sang the blues and played the 12-string Gibson guitar and a long neck banjo. This is a re-issue of her second album 'In My Own Time' - which was originally released in 1971.

Karen Dalton sang the blues and played the twelve string Gibson guitar and a long neck banjo. She was a talented, but troubled musician who battled with drug and alcohol addiction for many years - sadly, she died in 1993.

This, her second album, was recorded at Bearsville studios, produced by Bob Dylan's former bass player Harvey Brooks, was originally released in 1971 on Michael Lang's (Woodstock promoter) label, Just Sunshine. 'In My Own Time' includes a cover version of Richard Manuel's beautiful "In a Station" from The Band's 'Music from The Big Pink'.

The late Karen Dalton has been the muse for countless folk rock geniuses, from Bob Dylan to Devendra Banhart, from Lucinda Williams to Joanna Newsom. Legendary singer Lacy J. Dalton actually adopted her hero's surname as her own when she started her career in country music. Karen Dalton had that affect on people - her timeless, aching, blues-soaked, Native American spirit inspired both Dylan & The Band's "Katie's Been Gone" (on 'The Basement Tapes') and Nick Cave's "When I First Came To Town" (from 'Henry's Dream').

Recorded over a six month period in 1970 / 71 at Bearsville, 'In My Own Time' was Dalton's only fully planned and realized studio album. The material was carefully selected and crafted for her by producer / musician Harvey Brooks, the Renaissance man of rock-jazz who played bass on Dylan's 'Highway 61 Revisited' and Miles' 'Bitches Brew'. It features ten songs that reflected Dalton's incredible ability to break just about anybody's heart - from her spectral evocation of Joe Tate's "One Night of Love," to the dark tragedy of the traditional "Katie Cruel." Known as a great interpreter of choice material, Dalton could master both country and soul genres with hauntingly pining covers of George Jones' "Take Me" and Holland-Dozier Holland's "How Sweet It Is."

"There's something that's inherent in her voice, an understanding of sorrow... A great, very individual, idiosyncratic voice. An exciting voice. She is my favourite female blues singer."
- Nick Cave