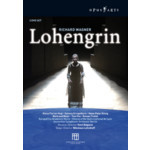 A new production from Festspielhaus Baden-Baden With powerful conviction, Nikolaus Lehnhoff interprets Wagner's Lohengrin as the dramatic struggle of masculine and feminine, revenge and compassion. Powerfully acted, almost like a Strindberg play, and musically of the highest order, this Lohengrin from the Festspielhaus in Baden-Baden will be a benchmark production for decades.