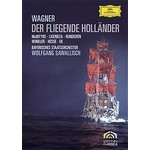 "The adaptaion by the Czech director Václav Kaslik...succeeds in gripping the viewer visually as successfully as does Wolfgang Sawallisch musically. Indeed Sawallisch is the reason to investigate this set for he gets gloriously eloquent playing from his wonderful Bavarian forces. No complaints about the soloists either." Penguin Guide, 2010 **/*

Lohengrin (recorded live at the Festspielhaus, Baden-Baden in 2006)
more suggestions…