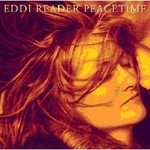 With 'Peacetime' Eddi Reader's rare blend of meltingly sweet vocals and towering romanticism combine with an astute and pragmatic nature to make her a unique and powerful figure in contemporary British music.

Eddi Reader started her musical career at the young age of ten when she began busking in Glasgow and then went on to tour Europe where she worked with circus and performance artists. Back in Scotland she joined the punk band Gang Of Four as a backing singer. She then went on to work as a session vocalist in London singing with such acts as The Eurythmics and Alison Moyet. In 1984 she and Mark E. Nevin formed Fairground Attraction who are best known for the UK #1 hit single "Perfect”. In 1992 Reader released her debut solo album 'Mirmama' and has continued to tour extensively throughout the world. 'Peacetime' is the follow up to the 2003 release 'Sings the Songs of Robbie Burns' which she recorded with the Royal Scottish National Orchestra.

Eddi Reader has built a strong solo career singing a contemporary take on the traditional folk music of her homeland. Such is Eddi's status in Britain she was awarded an MBE in '06 and sung at the opening of Scottish Parliament in 2004.

With 'Peacetime' Eddi Reader's rare blend of meltingly sweet vocals and towering romanticism combine with an astute and pragmatic nature to make her a unique and powerful figure in contemporary British music. She has effortlessly developed into one of popular music's most thrilling and affecting performers.

Eddie says the album started with a desire to work with some of the UK's amazing traditional folk musicians (led by John McCusker, who produced the album) and some contemporary players who she considers the best in their field. "They are free from the normal music business eccentricities and attitude that I associate with the pop industry,” she explains, "They are like old New Orleans jazz players in their lack of ego and interest in making a complete sound with whoever is in the room”.

The Songs of Robert Burns