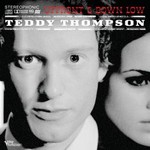 Teddy Thompson
Up Front and Down Low

Teddy Thompson's self-produced third album, 'Up Front & Down Low' offers distinctive readings of beloved country classics: George Jones' "She Thinks I Still Care," Ernest Tubb's "Walking the Floor Over You" and Merle Haggard's "(My Friends Are Gonna Be) Strangers." Equally impressive, however, are such lesser-known songs such as Boudleaux Bryant's regretful "Change of Heart," the yearning "Touching Home," Dolly Parton's bittersweet "My Blue Tears," the tongue-in-cheek Bob Luman hit "Let's Think About Living" and the Elvis Presley chestnut "I'm Left, You're Right, She's Gone." The album also features a lone Thompson original, "Down Low," whose heart-on-sleeve lyrics take on added resonance in this context.

"As strange as it may seem, country music was the music I was brought up on," says Teddy, whose parents are British folk-rock legends Richard and Linda Thompson. "It's the music that's closest to my heart and the music that speaks to me the most, and it's always been a big influence on my own songwriting. I was obsessed with country music when I was a kid, and it's definitely had a huge influence on the way I write songs. I was always attracted to songs that had a brilliant pun or a clever turn of phrase, but came from a dark, bitter place. As a writer, I've always gravitated towards that feeling."

'Up Front & Down Low' marks a temporary departure from the London-born, New York-based singer/guitarist's prior recorded work. Whereas his first two albums 'Teddy Thompson' and 'Separate Ways' showcased his formidable songwriting skills, 'Up Front & Down Low' focuses on Thompson's abilities as an interpreter of outside material. The collection finds him delivering personalized reworkings of a memorable assortment of songs drawn from America's rich country music tradition, all delivered with a level of commitment and musical imagination that consistently cuts to the emotional heart of the material.