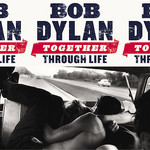 Bob Dylan
Together Through Life

Dylan has set a new record with his 46th release, 'Together Through Life', as the oldest musician to have a No. 1 album - it went straight to the top of the U.K. charts! At 67, the legendary singer / songwriter beat the record previously held by fellow music veteran, Neil Diamond - proving coolness is timeless! The greatest poet of our time, Bob Dylan is clearly as relevant as ever with this album.

Bob Dylan's 'Together Through Life' was recorded late 2008, prompted by the composition of a new song, "Life is Hard," which was written for the film 'La Vie En Rose', directed by French director Oliver Dahan. 'Together Through Life' follows 2006's Platinum album 'Modern Times', which debuted here in New Zealand at #1 as well as on the Billboard Top 200. It also reached the top of the charts in six additional countries and the Top 5 in 22 countries around the world.

"It's a powerful personal work by a man who still thinks for himself in an era of fear, conformity, and dehumanization. That it rocks mightily makes the message even more compelling. Whatever the hell it gets called, it'll be in the running for Best Album of 2009."
- Michael Simmons (Mojo)