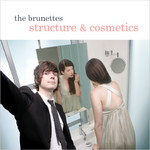 The Brunettes
Structure and Cosmetics

The third (and arguably best) long play from NZ band, The Brunettes is an album that eschews much of the bright, candy coating that characterised their previous efforts in favour of a more subtle, sophisticated palate of colours.

Because time flies when you're having fun, you probably hadn't realised that The Brunettes have been around for almost a decade. In fact, it's 5 years since The Brunettes' debut album 'Holding Hands, Feeding Ducks' hit NZ shelves! It was a near-perfect debut, but one that was at odds with the tight black jeans and Ramones tees that were de riguer at the time. Still, great reviews followed and discerning pop fans -- the ones who could tell a band from a bandwagon -- got it just fine.

Over the next 3 years there were two more low-key (but certainly not lo-fi) EPs -- 'Boyracer' and 'When Ice Met Cream' -- and in '04 their second album, 'Mars Loves Venus' took the bedroom-Spector of the debut and buffed it up to a glossy mirror finish.

Live, The Brunettes have never rested on their laurels, and their shows have run the gamut from small, intimate acoustic performance all the way through the formation of a 20-member, multi-instrumental supergroup at the '06 Big Day Out, featuring theremin, omnichord, more guitarists than you could count, and George Harrison's sitar, among other things.

In the intervening years, our heroes have supported such indie luminaries as The Postal Service, The Go-Betweens, The Shins, Clap Your Hands Say Yeah and Rilo Kiley through North America and the UK, and even found favour with Britain's notoriously fickle NME along the way. At any given time, if the band weren't recording, chances are they were playing a show somewhere in the world.

With no US record deal, the band sold albums by the thousands off their merchandise tables while touring that country, and the offices of Lil' Chief Records back in Auckland bulged with brown envelopes packed with CDs to be dispatched across the globe. Word, it seemed, was getting around.

A serendipitous encounter brought together The Brunettes and Sub Pop head honcho Jonathan Poneman. He loved the band and the rest, as they say, is history. A deal was signed and the only thing that Sub Pop was missing was a new album to release… which brings us to 'Structure and Cosmetics', The Brunettes' third and arguably best album.

'Structure and Cosmetics' is an album that eschews much of the bright, candy coating that characterised their previous efforts in favour of a more subtle, sophisticated palate of colours. As a result, it's a darker, more melancholy affair than its younger siblings, although you'll still find uptempo moments to make you clap your hands and dance.

Recorded in LA, Portland (with some help from new labelmates The Shins), New York and Auckland, there's a certain jaded homesickness to songs like "Small Town Crew" and "Obligatory Road Song". But it's not all introspection. There are songs about aliens, teen idols and hair care products, amongst other things. And then there's "Stereo [Mono Mono]", a collaboration with Flying Nun and Lil' Chief legend Edmund McWilliams aka Ed Cake, about the love between the left and right speakers of your stereo.

However, the defining moment of the album is its final, "The Secretary" referencing title track. Sounding like a post-apocalyptic Nancy and Lee, the song's ominous imagery of black shag pile carpet, discipline, submission and argyle will certainly confound the expectations of anyone who thought the band were just about holding hands and feeding ducks.

Ten years? The Brunettes? It could have been a heartbeat…

Wincing the Night Away

The Wind is Up