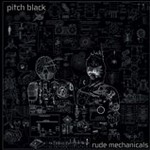 $27.00 In stock with supplier
ETA: 2-5 business days add to cart more by this artist

The 4th album from NZ electronica pioneers and dub n' bass terrorists, Pitch Black contains their usual mash-up of styles from 0 to 170bpm, with bottom end to test even the hardiest of speakers; bits you never knew were there before; and general stereophonic goodness riding on the carrier wave of dub - essential stuff!!!

Having been introduced to each other at a party in '96 by a mutual friend who said "You two have to talk about music!", they did just that. Subsequently Mike Hodgson turned up at Paddy Free's house with a 25min track and said "Can you turn this into a song?" Paddy added his ear for sounds and structure to Mike's dub madness - the likes of which he'd never heard before - and Mike said he loved it - and so the unique sound of Pitch Black was born.

The pair are from completely different places musically: Paddy "loves a good pop song and arrangement that grabs you and takes you away into another world", while Mike is "a sonic terrorist who enjoys pushing unfeasibly large subs at people while melting their brains with the dub". In other words, Paddy likes to do it FOR the people, while Mike likes to do it TO the people…

Having pumped their way through NZ's electronic music scene since their inaugural performance at the annual Gathering New Year's Eve Festival in '97, Pitch Black have spent the last 10 years rousing dance floor punters, generating rave reviews, winning awards and gaining thousands of fans across the world. They have shared the stage with acts such as Coldcut, Kraftwerk and Underworld. They have rocked everywhere from small basement clubs to massive stadiums. They have released three albums, three re-mix discs, and embarked on six world tours. Pitch Black songs have been included on many international compilations, film soundtracks, and they licensed tracks for use on 'CSI: Miam'i and all the music for the Sony PSP game CUBE. Paddy has been working on his solo album and creating soundtracks for local contemporary dancers, and Mike has been travelling the world with his multimedia work.

Which brings us to '07 and their fourth studio album, the hotly anticipated 'Rude Mechanicals'! The album contains 9 tracks in their usual mash-up of styles from 0 to 170 bpm, with bottom end to test even the hardiest of speakers, bits you never knew were there before, and general stereophonic goodness riding on the carrier wave of dub.

Hard to box into a single audio 'genre', Pitch Black is a combination of musical journeys. Their sound is distinctive; ranging from organic ambient beginnings and layered soundscapes to skanking keyboards, cutting acid riffs and thumping rhythmic grooves, with dub being the glue that holds their sound together.

Applauded not only for their sound, Pitch Black have built a reputation as a live electronic / multimedia act of world standard. Collaborating with computer programmer Ross George, Mike developed the Mideo video sampler for triggering synchronised video to music in real time. Delivering the full-sensory experience has always been central to their gigs, and performing live is fundamental in the development of their music - no accusations of email-checking or "just pressing play" for these men!

10 years on, and Pitch Black remain staunchly independent, operating outside of major label hype or backing and building an international fanbase through live touring and quality releases that stand up over time. 'Rude Mechanicals' illustrates perfectly that Pitch Black remain one of our most outstanding and relevant electronic acts.