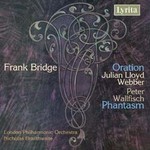 "In terms of choice if you want two majestic and subtly powerful works of tragic and even sinister grandeur then this disc is for you. These are their first ever commercial recordings and they are by no means uncompetitive in any sense - quite the contrary. The recordings still sound superb."
(Recording of the Month MusicWeb August 2007)

Oration (1930) and Phantasm (1931) were Frank Bridge's most substantial orchestral works and his only concertos. By the time of their composition Bridge was in his early 50s and at the height of his creative powers. With a string of powerful chamber works behind him it might be expected that his reputation would also have been soaring. However these chamber pieces – Piano Sonata, Third Quartet, Rhapsody Trio and Piano Trio – appeared to be out of step with current conservative fashions in British musical taste. The composer could barely conceal the hurt he felt in the savaging he received at the hands of some music critics – remarks such as "the composer is bartering a noble birthright for less than a mess of pottage" (The Musical Times, May 1930, p.42). He began to rely for performances of his new radical work on the patronage of the American Elizabeth Sprague Coolidge to whom the chamber works and the Rhapsody Phantasm were dedicated

Sinfonia (with music for Brass ensemble)