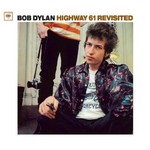 Taking the first, electric side of Bringing It All Back Home to its logical conclusion, Bob Dylan hired a full rock & roll band, featuring guitarist Michael Bloomfield, for Highway 61 Revisited. Opening with the epic "Like a Rolling Stone," Highway 61 Revisited careens through nine songs that range from reflective folk-rock ("Desolation Row") and blues ("It Takes a Lot to Laugh, It Takes a Train to Cry") to flat-out garage rock ("Tombstone Blues," "From a Buick 6," "Highway 61 Revisited").

Dylan had not only changed his sound, but his persona, trading the folk troubadour for a streetwise, cynical hipster. Throughout the album, he embraces drugged-out, surreal imagery, which can either have a sense of menace or beauty, and the music reflects that, jumping between soothing melodies to hard, bluesy rock. The revolutionary thing about Highway 61 Revisited is that it proved that rock & roll needn't be collegiate and tame in order to be literate, poetic, and complex.
5 / 5 All Music Guide.

Like a Rolling Stone
Tombstone Blues
It Takes a Lot to Laugh, It Takes a Train to Cry
From a Buick 6
Ballad of a Thin Man
Queen Jane Approximately
Highway 61 Revisited
Just Like Tom Thumb's Blues
Desolation Row

Come On Up To The House: Women Sing Waits

The Ghost Of Freddie Cesar