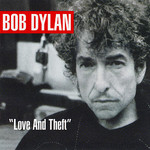 'Love and Theft' was the first studio album from Bob Dylan since 1997's Grammy Award-winning Album of the Year "Time Out of Mind".

Los Angeles Times describes the album as "filled with an energy and imagination of its own - almost as if he wanted to revisit some of the classic pop, folk and rock musical textures he heard on the radio as a youngster in Minnesota".

The release of 'Love And Theft' marked another milestone in the career of one of the world's most extraordinary artists, and comes amidst one of Bob Dylan's most creative and prolific periods.

Packaging includes new photos by David Gahr, who's responsible for many classic Bob Dylan photos from the 1960s.