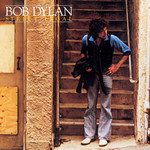 Critically panned in the US at the time of release and often overlooked as an essential album in Dylan's catalogue, Street Legal is absolutely worth discovering. Given his second decade as an artist is dominated by one of his greatest releases, Blood On The Tracks, and Street Legal was wedged between Desire and Slow Train Coming it's perhaps understandable that Street Legal has been overlooked.

Dylan brought many of the players from his Rolling Thunder Revue touring band in for the rehearsal sessions which, added to the songs that were no doubt influenced by his recent marriage breakup, delivered a raw energy to the album's eventual recording. The gospel-tinged "Changing Of The Guards" alone is worthy of a concentrated effort by the listener, and surely has to be one of his best album openers.