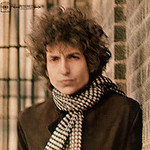 Only a year after HIGHWAY 61 REVISITED, Dylan miraculously topped himself with further epigrams of surrealistic poetry and emotional intrigue. The pressure of a punishing touring schedule and high public profile helped drive him to an unbelievable fit of creativity as he spontaneously scribbled these gems in his hotel rooms. We were spoiled with a double album, more Dylan music than we had previously heard, yet still destined to endure. BLONDE ON BLONDE surrounds the folk-rock bard with the likes of Al Kooper, Robbie Robertson, Charlie McCoy and Kenny Buttrey, all seasoned musicians giving this album a relaxed confidence quite unlike the youthful energy of HIGHWAY 61 REVISITED. Decades later this album still rewards and surprises. A gigantic record in every sense.