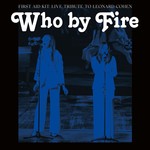 Performed at the Royal Dramaten Theatre in Stockholm in 2017, 'Who By Fire' is a theatrical staging of Leonard Cohen's songs, poems, and letters.

Klara and Johanna of First Aid Kit, longtime fans and greatly inspired by Leonard Cohen, were deeply saddened by his passing in November of 2016; they decided to stage this production as a tribute to him, being joined by an array of guest artists and musicians.

In The Blue Light